Maria Sharapova May Get a Second Chance

Update Required To play the media you will need to either update your browser to a recent version or update your Flash plugin.
By Dan Friedell
28 April, 2016


Tennis star Maria Sharapova was almost in tears in early March when she told reporters in Los Angeles, California, that she tested positive for a banned drug.

Sharapova said the drug meldonium came up on her test at the Australian Open in January.

She said she made a "huge mistake." Three of her major sponsors suspended their business relationships with her after the test results. 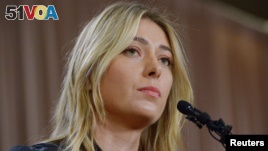 Maria Sharapova announces that she failed a drug test after the Australian Open, during a news conference in Los Angeles, March 7, 2016. (J. Kamin-Oncea/USA Today Sports)

The International Tennis Federation, or ITF, started an investigation in March and suspended Sharapova while it was gathering information.

She was one of many athletes suspended earlier this year. Now, she and other athletes may get a chance to play again this summer in time for the 2016 Olympic Games in Rio De Janeiro, Brazil which start on August 5.

The World Anti-Doping Association, known as WADA, monitors the drug-testing programs of 600 sports organizations around the world including the International Olympic Committee.

Late last year, WADA announced it was adding meldonium to the list of banned drugs for 2016. The little-known drug was popular among athletes from Russia and countries in Eastern Europe. WADA says it detected the drug in 172 tests starting on January 1. 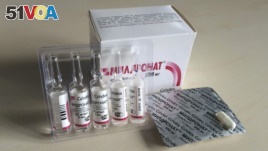 Tablets and vials of meldonium, also known as mildronate, are photographed in Moscow, March 8, 2016. Russian tennis star Maria Sharapova says she failed a drug test for meldonium at the Australian Open.

The drug was so popular, the BBC reported almost 500 athletes at the 2015 European Games tested positive for it. The drug is supposed to help athletes work harder while training or during competitions by carrying more oxygen than usual to muscles.

However, some athletes said, although they stopped taking the drug in 2015, it still showed up in their drug tests in 2016.

That has created a dispute over the suspensions. WADA recently said it does not know how long it takes meldonium to leave the body, especially if athletes were taking it for a long time.

WADA now says athletes who stopped taking the drug last year "could not reasonably have known or suspected" that it would still come up on a drug test this year.

Some banned athletes now are permitted to compete in their sports while more research is being done on meldonium. Two of those athletes are a Russian gymnast and a triple-jumper from Bulgaria.

Sharapova is still suspended. Her hearing is expected to take place soon, but the exact date has not been made public. The ITF is expected to rule sometime in the coming months.

The Associated Press news agency reports that the ITF could take up to three months to announce its decision. That means Sharapova will likely not be able to play in the French Open when it opens on May 22. She won that competition twice.

Dan Friedell adapted this story for Learning English based on reporting by VOANews. Mario Ritter was the editor.

Do you think Sharapova and some other athletes should be able to go back to their sports? We want to know. Write to us in the Comments Section or on 51VOA.COM.

doping – n. the illegal use of a drug (such as a steroid) to improve an athlete's performance

sponsor – n. a person or organization that pays the cost of an activity or event (such as a radio or television program, sports event, concert, etc.) in return for the right to advertise during the activity or event