Update Required To play the media you will need to either update your browser to a recent version or update your Flash plugin.
By Shelley Schlender
05 August, 2014

In the eyes of the United States federal government marijuana is an illegal drug. But almost half of the U.S. states have made marijuana use legal or at least a minor crime.

People who support legalization of marijuana say some kinds of the plant offer extraordinary help for human health. For example, one kind of medical marijuana is reported to ease effects of epilepsy, a disease of the nervous system.

Rachael and Shawn Selmeski are happy that their baby girl, Maggie, can hold up her head. That is a normal mark of growth for a four month old child. But Maggie is two years old.

Maggie's father says that simple act is a huge step -- or what he calls a milestone -- for his special needs daughter. 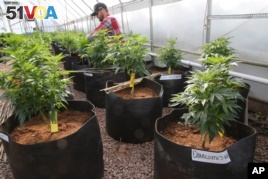 In this Feb. 7, 2014 file photo, a worker cultivates a special strain of medical marijuana known as Charlotte's Web inside a greenhouse, in Colorado Springs, Colorado.

"They're inch stones [[small steps]] in the big picture, but they're milestones for our children, for our special needs kids."

Maggie has spent much of her life in the hospital. Shortly after birth, doctors found that Maggie has a rare form of epilepsy. Epilepsy can cause people to suddenly become unconscious. It also can cause violent, uncontrolled movements of the body called seizures.

Maggie's kind of epilepsy can cause hundreds of seizures in a single day. Her parents hurried her to the hospital emergency room many times in the first year of her life. Doctors administered treatments and medicines to save her life. But Mr. Selmeski says these treatments also had other severe effects on his little girl.

"They drugged her up. She would sleep for 20 hours a day, and wouldn't make a noise all day long. They sedated every part of her body."

The Selmeskis wanted treatment with fewer of these unwanted side-effects. So they turned to a new kind of medicinal marijuana called Charlotte's Web. Marijuana growers in the U.S. state of Colorado developed the plant.

Marijuana is legal in Colorado but not in Tennessee where the Selmeskis lived. Maggie's doctors could not order marijuana as a treatment. So, they urged the Semelskis to do something extreme -- head west.

One year ago, the family moved to Colorado. They began giving Maggie Charlotte's Web marijuana mixed with olive oil three times a day. The Semelskis say Maggie's condition improved immediately. She could digest food better. She began developing more muscle. And they say she began to smile more.

Charlotte's Web contains very little of the chemical THC that gives marijuana users a high feeling. But chemist Bryson Rast says that Charlotte's Web is loaded with another chemical, cannabidiol, also known as CBD. The chemical cannabidiol is an anti-inflammatory, meaning it reduces pain and swelling in the body.

Edward Maa is a brain doctor. He says he would like to compare this high CBD medicinal marijuana to federally approved drugs for epilepsy. But, the only marijuana that he may legally study is old, or out-of-date.

Mr. Maa says it is time for the federal government to support research into Charlotte's Web. He says he does not care about the political effects or personal emotions around the medicinal marijuana debate.

"I don't care about the political implications or any of the emotional baggage that it carries. If it works, I'd like to be able to use it."

Most parents will do just about anything to help lessen the suffering of their children. About two hundred families have moved to Colorado from other parts of the country just to get Charlotte's Web for their epileptic children.

The Selmeskis say they hope that growing interest and knowledge of marijuana's medical value will lead to federal support for more research.

This story was written by VOA correspondent Shelley Schlender in Colorado. It was adapted into Special English and produced by Anna Matteo.