Update Required To play the media you will need to either update your browser to a recent version or update your Flash plugin.
By Anna Matteo
10 April, 2016


The language used by scientists to explain complex ideas can be difficult and -- well, let's face it -- sometimes boring.

The language, with its Latin words and long scientific terms, could be one reason some people avoid learning about science, especially children.

American Danielle Dixson is a marine biologist. She wants to make science fun for children. Dixson has turned that idea into a series of children's books. The nine books are written so that her research is easy to understand. 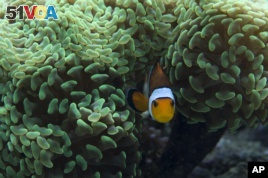 Coral reefs are home to many -- like this clownfish! But they are in danger. Scientists are around the world are trying to raise awareness. (This photograph is from an exhibit called 'Coral Reef - Secret Cities of the Sea' at the Natural History museum in London, March 2015. AP PHOTO)

"I just don't really think kids should be left out of it and I thought that story books may be one of the easiest ways to sort of captivate them and have them understand."

Danielle Dixson is an assistant professor at the University of Delaware. Dixson says another goal of her science writing is to help increase understanding of the ocean environment.

She spent almost two years in the South Pacific working on her post-doctoral research. She went to the island nation of Fiji to investigate coral reefs that are collapsing or, as she says, degrading.

The goal of her research is to identify why some healthy coral reefs are breaking down. She also wants to find out how this degradation affects fish that live in and around the reefs.

"A number of the reefs are converting from being, you know, these beautiful coral reef systems that have a lot of holes for animals to hide in, into reefs that the coral's degrading and collapsing and then there is not as much hiding spaces for fishes and things like that."

Early in her research, Dixson made some videos for people in Fiji. The videos explained her work to the local community. She says she wanted them to understand how her research would help them.

For the local children, Dixson started making books explaining her work. This helped to keep them from walking through her "laboratory" – baby pools filled with water she was using for her experiments.

"I was living, actually, in the village with some of the locals. It was a lot easier to get research done if they understood what I was doing and how it would help them. And one of the ways that I was able to connect with the adults was I would make these videos for them. And then I started making children's books for the kids so that they would have a better idea of why I was there, so that when I ask them not to walk through the baby pools I was using for experiments or something like that, that that would actually happen."

When Dixson returned to the United States, she started doing the same thing for children in this country. She uses colorful story books to capture the imagination of children. While she has their attention, she provides very useful information about science.

Home is where the heart is.

Home and family are at the heart of many great stories. The search for one's home or protecting one's home is universal.

In one of her books, Danielle Dixson tells young readers about two fish -- Mr. and Mrs. Goby. The fish live in a coral reef. And their home is sick. 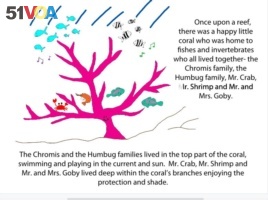 "Mr. and Mrs. Goby lived in their coral home and all if a sudden coral starts to get sick, but they needed their house to stay alive. So what would they do to help it? It sort of goes through all the scientific findings, but it does it in the sense of those two gobies are trying to save their home."

The story about the little fish was based on one of Dixson's studies. She explains that one form of seaweed kills coral on contact.

"We do know that there is one species of the seaweed that if you put in contact with coral for 48 hours, the contact point of the coral will be dead. There are a number of organisms that live inside corals -- this tiny little goby being one of them."

The goby fish have a strong interest in keeping their coral home healthy. When coral are in danger from the seaweed, the marine organisms send a distress signal to Mr. and Mrs. Goby.

"Please come help!" And that's just what the fish do. Dixson explains.

"So it was so interesting to see since goby lives in the coral, that's really its home, it should have a vested interest in protecting its home. So I ran a series of experiments to figure, you know, does the goby help the coral fight the seaweed? And it ends up that they do. We found out that the coral actually can chemically communicate with the goby to tell it, like, ‘Come help me! I'm hurt right here!'"

As a marine scientist, Dixson wants her stories to be both educational and inspirational, serving as an agent for change. She also includes in her books "a call to action," asking readers what they can do to make a difference.

"One of the things I do in those story books is I have a last page. And the last page talks about what you can do to help. You know, there is a lot of things that even a 6-year-old is able to do, whether it's shutting your lights off when you leave a room, or riding your bike to your friend's house instead of having your parents drive you. There is a lot of stuff that they can do and still feel they're making a difference."

Danielle Dixson's books shine a light on the environmental problems facing our world's oceans. They also make science fun and understandable for children.

But her books may have an unintended consequence, something she may not have planned on.

When Danielle visited an aquarium at age five, a tour guide gave her a book about whales. The conversations that resulted from that book inspired Dixson to become a marine biologist. Perhaps her books will inspire a child to make science a career.

marine biologist - n. a scientist who studies life in the sea

captivate - v. to get and hold the attention of (someone)

degrade - v. to cause (something complex) to break down into simple substances or parts

inspirational - adj. causing people to want to do or create something