Update Required To play the media you will need to either update your browser to a recent version or update your Flash plugin.
By Susan Shand
17 March 2020


The coronavirus outbreak has sent shock waves through stock markets in the United States and around the world.

Now, with a sharp drop in share prices, investors are beginning to consider the possibility of something worse than a recession. With the possibility of weak economic conditions over a long period, people are now talking about a credit crisis or even a depression.

The rising shock from the outbreak and questions over how it will spread has left both investors and economists trying to understand the financial effects. 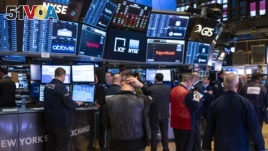 "This market looks like it has already priced in most of a...recession," said Frances Donald, an economist at Manulife Investment Management. "It is now on top of that having to price in some probability of a credit crisis."

Experts with leading banks and financial businesses now say they expect a sharp drop in economic activity over the next three months, maybe longer. They note that governments in the United States and Europe have told citizens to stay at home and ordered restaurants and schools to close.

There is hope among some economists, however, that the economy will start expanding again later this year. But that depends, in part, on efforts to contain COVID-19, the disease caused by the new coronavirus.

The S&P 500 is one leading measure of American stock prices. The S&P, on average, has fallen 28 percent from its high to lowest levels during recessions, notes Keith Lerner, a market historian. Lerner works for Truist/SunTrust Advisory Services.

At the end of trading on Monday, the S&P 500 index had dropped nearly 30 percent since its high on February 19.

"A 2008-like financial contagion is not yet priced into this market," Donald noted. She said the stock market will not calm down until investors see a calming of credit markets and the number of coronavirus cases starts to decrease.

Stocks fell on Monday, a day after the U.S. Federal Reserve took emergency action designed to strengthen the economy. The Fed used the same weapon -- interest rates -- that helped the country recover from the financial crisis of 2007 to 2009.

But the market's reaction on Monday after the Fed's decision to cut interest rates is "a sign of a total breakdown of confidence," said economist Peter Cardillo of Spartan Capital Securities. He says that brings up the main question: how bad a recession will we have?

Joachim Fels serves as global economic advisor at PIMCO. He said in a written commentary that a worldwide recession appeared to be inevitable. He added that the job for governments and central banks was to try to make the recession as short as possible and to avoid an economic depression.

Fels defined a depression as a prolonged period of weak economic activity, a large rise in unemployment, businesses going bankrupt and bank collapses.

One big Wall Street name is very concerned. Billionaire investor Ray Dalio is worried that the Federal Reserve used all its power too early when it cut interest rates to near zero.

Dalio says he was concerned that another economic downturn could leave nowhere to go but to the same road that brought on the depression of the 1930s.

Experts with Deutsche Bank noted last week that the market's recent volatility was coming at "a frequency previously seen only in the Great Financial Crisis and the Great Depression."

"Nothing else matters if we can't get this under control," said Eric Winograd, chief U.S. economist at AllianceBernstein. Winograd noted that he does not expect a depression, but a very bad recession.

outbreak - n. the sudden arrival of disease or war

index - n. a group of things that are listed together

contagion - n. in economics, the process of one bank or company failure after another

inevitable - adj. something that is almost certain to happen

bankrupt - adj. not having enough money to pay debts

frequency - n. the condition of something happening often