Update Required To play the media you will need to either update your browser to a recent version or update your Flash plugin.
By Mary Gotschall
05 January, 2016


U.S. stock prices fell sharply Monday, following conflicts in the Middle East, and weaker economies in China and in Europe.

U.S. stocks started the new year with the most selling of stocks and investments since September 2015, reported CBS News.

Stocks lost between 2 percent and 3 percent in trading. 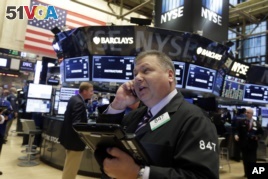 The weaker economy in China "reignited fears of a global slowdown," according to Reuters.

Chinese stocks fell about 7 percent Monday. This caused officials to halt trading for the day to stop the falls on the Shanghai and Shenzhen exchanges.

It was the first time China used a "circuit breaker," said CBS News. A "circuit breaker" in a stock exchange stops trading that happens when investors panic and sell too much in too short a time.

Reports showed that Chinese manufacturers are not producing as much as before. Investors say China's economic growth is slowing.

China is the world's second-largest economy and a key market for many other nations.

Japan's Nikkei index was down 3 percent, and Hong Kong's Hang Seng index fell more than 2 1/2 percent by the close of trading.

Mary Gotschall adapted this story for Learning English from VOA News and other sources. Kathleen Struck was the editor.

slowdown – n. a decrease in the speed at which something is moving or happening

slump – n. a period of time when an economy is doing poorly

reignite – v. to cause (something) to suddenly occur again

mechanism – n. a process or system that is used to produce a particular result