Update Required To play the media you will need to either update your browser to a recent version or update your Flash plugin.
By Elizabeth Stern
25 August, 2012

BARBARA KLEIN: And I'm Barbara Klein with PEOPLE IN AMERICA in VOA Special English. Today, we explore the life of dancer and choreographer Martha Graham. She created almost two hundred dance pieces. She is often called the Mother of Modern Dance. Her influence on the world of dance continues today.

STEVE EMBER: In the beginning of the twentieth century, women like Isadora Duncan and Ruth Saint Denis wanted to create a new form of dance. Duncan and Saint Denis felt restricted by ballet. Modern dance was created as a revolt against ballet. 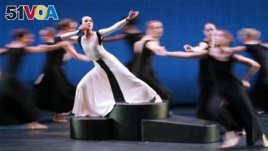 Dancer Fang-Yi Sheu from Taiwan, in white dress, performs sketches from "Chronicle" in Cologne, Germany, in July 2006 at the start of a European tour by the Martha Graham Dance Company
Martha Graham was one of the most famous dancers and creators of dance, called choreographers. She brought modern dance to a new level of popularity in American culture. She created a new language of movement that expressed powerful emotions.

She started traditions that are still used in modern dance today. They include expressive movements of the body to tell a dramatic story, special music, lighting, stage design and costumes.

BARBARA KLEIN: Martha Graham was born in the small town of Allegheny, Pennsylvania in eighteen ninety-four. After Martha turned fourteen years old, her family moved to Santa Barbara, California. While traveling across the Midwest, Martha enjoyed the wide, open spaces of nature. She also enjoyed the beautiful flowers and plants in California. The free, expressive movements of modern dance were clearly influenced by the beauty of nature Graham observed. 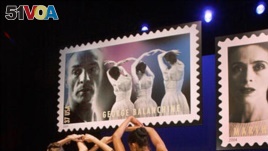 In May 2004 the U.S. Postal Service released new stamps honoring Martha Graham, George Balanchine and two other American choreographers, Agnes de Mille and Alvin Ailey
STEVE EMBER: Earlier in her life, however, Martha did not know that she would become a dancer. Her father was a doctor and her family was very religious. They were members of the upper class and did not accept dance as an art form. Still, in nineteen ten, Martha's father took her to see a dance performance by Ruth Saint Denis, one of the first modern dancers in America. Martha was sixteen and she decided then that she wanted to become a dancer.

BARBARA KLEIN: Ruth Saint Denis and Isadora Duncan were at the center of attention in modern dance. They established some of the traditions we see today. For example, Duncan was famous for starting the tradition of not wearing dance shoes while performing. Saint Denis was famous for creating dances influenced by other cultures. She studied dance from countries such as Mexico and Egypt, instead of the European countries where ballet had started. Martha Graham took an immediate interest in this new art form.

STEVE EMBER: Martha's parents, however, did not approve of her sudden desire to dance. At this time, people saw American dance as a lower art form. Graham chose to follow her dream of dancing, even though she was considered too old to begin dancing. She was in her early twenties when she began studying dance in nineteen sixteen. She attended the school created by Ruth Saint Denis and her husband, Ted Shawn in Los Angeles, California.

At the Denishawn Dance School, Graham worked very hard to improve her ability to dance. She trained her body to become strong enough to meet the difficult demands of dance. She performed with the Denishawn dance company for several years before moving to New York City. There, Graham performed in shows but she wanted to make greater experiments with dance.

BARBARA KLEIN: Martha Graham started teaching dance at the Eastman School of Music in Rochester, New York. Later she returned to New York City to teach at Carnegie Hall. She began to choreograph, or create the steps of dances. In order to express herself freely, she decided to establish her own dance company and school. In nineteen twenty-six she started the Martha Graham Center of Contemporary Dance.

She enjoyed having her own company of students to perform her dances. Graham produced a dance called "Heretic" in nineteen twenty-nine. She wore all white and danced against a wall of dancers wearing all black. Graham began to work with music composer Louis Horst. She worked with him until he died in nineteen sixty-four. Graham once said that, without Horst, she would have felt lost.

STEVE EMBER: In nineteen thirty-six, Graham created "Chronicle," one of her most important dances. "Chronicle" was influenced by current events including the Great Depression and the Spanish Civil War. The dance expressed sadness and loneliness. At this time, showing strong emotions in dance was very rare. Graham also created dances based on ancient Greek tragic stories and famous female heroines.

At first, people did not react well to Graham's style of dancing. It was very different from European ballet, which was more commonly accepted. Graham's dances were powerful, with strong and sharp movements. Some of the movements involved contracting and releasing parts of the body, using the arms in dramatic movements and falling to the floor. These movements are still used in modern dance today.

STEVE EMBER: In nineteen fifty-one, Graham was among the people who established the dance program at the Juilliard School in New York City. It is still one of the best arts schools in the country. Many famous artists have begun their careers by studying there. Graham created her largest dance in nineteen fifty-eight. She named it "Clytemnestra," and used music from the Egyptian composer Halim El-Dabh.

Graham worked with other famous and influential people in the world of dance. Many of her students became famous dancers and choreographers. She also taught movement to famous people. including singer Madonna, actress Bette Davis and film director Woody Allen.

BARBARA KLEIN: Some of her dances were filmed and made into a DVD called "Martha Graham: Dance on Film." This is a collection of three programs Graham made for American public television in the nineteen fifties and sixties. "A Dancer's World" is an introduction to Graham and her work. She tells about her dances and her dance group shows some of their methods. The DVD also includes films of two of her dances, "Appalachian Spring" and "Night Journey."

STEVE EMBER: Graham continued to dance past the age of seventy. Once again, she was met with criticism from people who came to watch her shows. Younger people knew that Graham was an important influence but they did not understand the meaning behind her dances. Graham began to suffer emotionally. She began to drink too much alcohol.

She later wrote a book about herself, called "Blood Memory." In her book, she wrote that she performed for the last time in nineteen seventy, when she was seventy-six years old. Two years later Graham stopped drinking alcohol. She went back to her dance company to choreograph more dances. The final dance she completed was called "Maple Leaf Rag," which she finished in nineteen ninety. Scott Joplin composed the music.

BARBARA KLEIN: Martha Graham received many awards during her lifetime, including the Presidential Medal of Freedom in nineteen seventy-six. She was the first dancer to receive the country's highest civilian honor. She died in nineteen ninety-one at the age of ninety-six. In nineteen ninety-eight, Time magazine listed her as the "Dancer of the Century" and as one of the most important people of the twentieth century. The Martha Graham Dance Company still performs her dances in New York and around the world.

STEVE EMBER: This program was written by Elizabeth Stern. It was produced by Lawan Davis. I'm Steve Ember.

BARBARA KLEIN: And I'm Barbara Klein. You can learn about other interesting Americans at our Web site, 51voa.com. Join us next week for PEOPLE IN AMERICA in VOA Special English.
Related Articles
go top