Update Required To play the media you will need to either update your browser to a recent version or update your Flash plugin.
By Dorothy Gundy
20 January, 2019


Civil rights movement hero, Martin Luther King, Jr. is honored with a holiday on the third Monday in January. He would have been 90 years old this month but was murdered in 1968 at the age of 39.

King led a movement of non-violent, peaceful protests to fight racial injustice in the United States. The first example of this movement began in December of 1955. It was the Montgomery Bus Boycott in the southern state of Alabama.

Many southern cities, including Montgomery practiced racial segregation, or the separation of black and white Americans in public places. When using public transportation such as buses, the law in Montgomery stated that blacks must enter from the back door and the first ten rows of seats were for whites only. On December first in 1955, a black woman, Rosa Parks, was riding a bus on her way home from work. She refused to give her seat to a white man and was arrested. 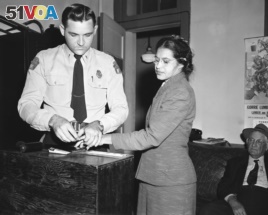 FILE - Rosa Parks, whose refusal to move to the back of a bus, touched off the Montgomery bus boycott and the beginning of the civil rights movement, is fingerprinted by police Lt. D.H. Lackey in Montgomery, Alabama, Feb. 22, 1956.

At the time, King was a 26-year-old clergy man at the Dexter Avenue Baptist church in Montgomery.

In an interview with the British Broadcasting Corporation in 1961, he explained what happened next.

"More than 99% of the Negro people of Montgomery rose up with a.... righteous indignation, I would say. And this led to the bus boycott.... They asked me serve as a spokesman....and from this time, I found myself in a leadership position in the civil rights struggle."

In Montgomery, King and others organized a one-day boycott of city buses on December 5. Three days later, under the leadership of King and others, a list of demands was presented to city officials. The demands included fair seating for all and courteous treatment by bus operators.

The demands were not met. City officials and white opponents tried to defeat the boycott. Blacks organized and helped one another to meet transportation needs. Many blacks walked or rode bikes to where they needed to go. King's home was bombed in early 1956 -- he and his family were not hurt. That same year, King was arrested and found guilty of interfering with a business. Blacks in Montgomery stayed off city buses through 1956.

More than a year after the boycott began -- on the 20th of December in 1956 -- the Supreme Court agreed with a lower court decision that public bus segregation is not legal.

Dorothy Gundy reported on this story for Learning English. Caty Weaver was the editor.

boycott – n. to refuse to buy, use, or participate in something as a way of protesting

indignation – n. anger caused by something that is unfair or wrong

courteous – adj. very polite in a way that shows respect