Update Required To play the media you will need to either update your browser to a recent version or update your Flash plugin.
By Dorothy Gundy
14 January, 2018


Martin Luther King, Jr. was an American leader of the civil rights movement in the 1960s. King is remembered for his non-violent protests against the unequal treatment of African-Americans. His actions led to equal rights laws for all people.

In addition to being an activist, King was a scholar and religious leader – a pastor in the Christian Baptist church. One of the most famous events related to him came in 1963. That year, more the 250,000 people gathered in Washington, D.C. for the "March on Washington." 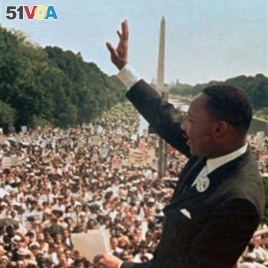 Dr. Martin Luther King Jr. waves to the crowd at the Lincoln Memorial for his "I Have a Dream" speech on August 28, 1963

King spoke to them on the steps of President Abraham Lincoln's memorial. He delivered a historic address known as the "I Have a Dream" speech.

One of the most famous lines from the speech reads: "I have a dream that...one day ... little black boys and black girls will be able to join hands with little white boys and white girls as sisters and brothers."

King's actions helped pass the Civil Rights Act of 1964. The law ended the legal separation of people by race in public places. The act also banned job discrimination on the basis of race, color, religion or national origin. King and other activists watched the president sign the law.

The Civil Rights Act was important, but it did not address all kinds of racial discrimination. For example, black Americans still did not have the same voting rights as white Americans, especially in southern states.

So, in March of 1965, a group of activists in Alabama marched in protest of unequal voting practices. State police attacked the protesters. Some wanted to answer with violence, but King urged peaceful action instead.

The events in Alabama pushed Congress to pass the Voting Rights Act. It was signed into law by President Lyndon Johnson in August of 1965.

In the following years, King worked for economic equality. In April 1968, he was attending a workers' strike in Tennessee. While he was standing outside his hotel room, a sniper shot him in the face. King soon died of his wounds.

The shooter was identified as a criminal who had escaped from jail. James Earl Ray was a white man who said he hated King. Ray was found guilty and sent to prison.

King is remembered for many things, including his focus on nonviolent action to achieve social and political change. In 1986, the U.S. government observed the first Martin Luther King Day. Many Americans have the day off school and work. They are urged to use the time to volunteer in their communities.

Martin Luther King, Jr.'s life and achievements are also honored at a memorial. It was dedicated in Washington, D.C. in 2011.

scholar – n. a person who has studied a subject for a long time and knows a lot about it

basis – n. a reason for doing something

origin – n. the place, social situation, or type of family that a person comes from

address – v. to give attention to something

focus –v. to direct your attention or effort at something specific

achieve –v. to get or reach something by working hard

achievements –n. something that has been done or achieved through effort: a result of hard work

Do you remember and honor a historic person? Who is it and why? Let us know in the Comments Section.