Update Required To play the media you will need to either update your browser to a recent version or update your Flash plugin.
By Alice Bryant
28 March 2021


The suspect in the Boulder, Colorado, shooting had been convicted of attacking a classmate. He could still buy a gun.

The man accused of opening fire on three businesses in the Atlanta, Georgia, area bought his gun just hours before the attack. He did not have to wait.

They are just the latest U.S. mass shooting suspects who were easily able to get guns due to limited guns laws and background check failures. 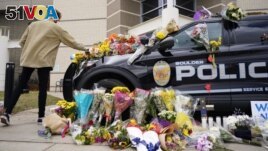 In this March 23, 2021, photo, a man leaves a bouquet on a police cruiser parked outside the Boulder Police Department after an officer was one of the victims of a mass shooting at a King Soopers grocery store in Boulder, Colorado. (AP)

Since the two most recent shootings, President Joe Biden has called for stronger gun laws. He is urging expansion of background checks and a ban on assault weapons. But many Republicans oppose the measures.

Here is a look at how suspects in several mass shootings got their weapons:

It is not known where Alissa bought his gun or whether the assault of his classmate came up on a background check. If he had been convicted of a serious crime, his gun purchase would have been illegal under federal law. Alissa is charged with 10 counts of murder.

Robert Aaron Long bought a 9-millimeter handgun just hours before shooting eight people at three massage businesses in the Atlanta area, police said. Georgia, like most U.S. states, has no waiting period to buy a gun. Long claimed to have a "sex addiction," police said.

Federal law bans guns for people who are addicted to a controlled substance or who have been ordered to spend time at a mental health or substance abuse treatment center. But that law does not discuss treatment for other addictions as a barrier to ownership. Long is charged with eight counts of murder.

Seth Aaron Ator bought an assault rifle through a private sale, which avoided a federal background check. Ator shot from his car into passing vehicles and shopping areas. He also stole a mail truck, killing the driver.

Ator had been blocked from getting a gun in 2014 after his background check showed mental illness. But private sales do not require a federal background check. And they make up about 40 percent of all U.S. gun sales, some estimates say. Ator was killed by police.

Connor Betts had been temporarily removed from his high school for making lists of people he wanted to harm. But officials said there was nothing in his background check that prevented him from buying the weapon he used to kill people at Ned Peppers Bar in Dayton.

Ohio law says records of crimes committed under the age of 18 must be removed within five years or when the person turns 23. Betts was 24. He bought the gun online from a Texas seller. Betts was killed by police.

A Crusius family lawyer said his mother had called police to raise concerns about an assault weapon her son bought. Police said she was only worried about his safety, not about him being a threat to anyone else.

Crusius had written a racist message on the internet just before the El Paso attack and he appeared to target Mexicans.

Texas does not have the kind of "red flag law" that other U.S. states have. The red flag permits courts to take guns from people who may be considered dangerous. Crusius is charged with capital murder in Texas, federal hate crimes and federal firearms offenses.

convict – v. to prove that someone is guilty of a crime in a court of law

background check – n. a process that checks what a person has done in the past to decide whether they can buy a weapon

semi-automatic – adj. a firearm designed to fire one bullet with one trigger squeeze, then automatically reload the chamber wand be ready to fire again

massage – n. the action of rubbing or pressing someone's body in a way that helps muscles to relax or reduces pain in muscles and joints