Update Required To play the media you will need to either update your browser to a recent version or update your Flash plugin.
By Caty Weaver
14 January, 2019


Tens of thousands of teachers went on strike Monday in Los Angeles, California.

"Students, we are striking for you," said teachers union President Alex Caputo-Pearl. He spoke to a cheering crowd of teachers marching in the rain. 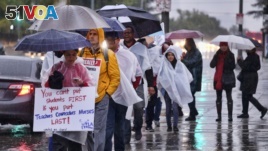 Los Angeles teachers walk on a picket line in pouring rain in front of Los Angeles High School during a city-wide teacher strike on Jan. 14, 2019.

Los Angeles is the second-largest school district in the United States.

Members of United Teachers Los Angeles voted last year to call a strike if the union and school district failed to reach an agreement. The teachers want higher wages and smaller class sizes.

Months of negotiations between the two sides ended without a deal. It follows teacher strikes in other states.

The union has 35,000 members. Schools are open in the Los Angeles Unified School District, which serves 640,000 students.

The school district has hired hundreds of substitute teachers to work during the strike. The union calls that irresponsible and has called on parents to consider keeping students home or join marchers.

The district argues that the union's demands could lead to financial ruin. The school system says it expects a $500-million deficit this budget year. Billions of dollars are required for payments and health care for retired teachers.

Negotiations were suspended in December, and re-started this month, but little progress was evident in the contract dispute. The union rejected a district offer Friday. It proposed to add almost 1,200 teachers, guidance professionals, health care workers and librarians and reduce class size by two students.

The offer also included a proposed six percent pay raise over the first two years of a three-year contract. The teachers' union wanted a 6.5 percent increase at the start of a two-year deal. The union also wants considerably smaller classes, now often filled by more than 30 students. The union is demanding more nurses, librarians and counselors to "fully staff" schools.

Teachers are hoping to build on the "Red4Ed" movement that began last year in West Virginia and moved to five other states. It spread from conservative states with "right to work" laws, which limit the ability to strike, to the more liberal West Coast, with strong unions.

The labor union argues that the school district has $1.8 billion that could be used to finance the pay and staffing increases. The district said that money is meant for retiree benefits and other costs.

The union says Beutner, an investment banker and former Los Angeles deputy mayor, and school board members are trying to privatize the district.

The union says Beutner and the school board support calls for school closures. It says they are turning public schools into charter schools. Charters are privately operated public schools that compete for students and financial support.

Beutner has said his plan to reorganize the school district would improve services to students and families. He and his supporters on the board want to create an education system with public and charter schools under the same leadership.

The Associated Press reported this story. Caty Weaver adapted it for Learning English. George Grow was the editor.

substitute – n. a person or thing that takes the place of someone or something else

benefit – n. money that is paid by a company or by a government when someone dies, becomes sick or stops working

staff – v. to supply (an organization or business) with workers

librarian – n. a specialist in the care of books, magazines, documents and other records