Update Required To play the media you will need to either update your browser to a recent version or update your Flash plugin.
By Dan Friedell
03 August, 2016

The American singer and songwriter Matisyahu is from New York City.

On a recent trip to Hawaii for a show, he found a street musician who was singing his song "One Day." 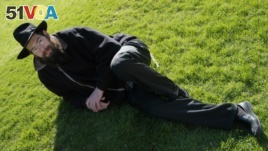 Matisyahu photographed in the Crown Heights neighborhood of the Brooklyn borough of New York, April 15, 2005.

Matisyahu is Jewish and was once a Hasidic Jew. Men who are Hasidic Jews wear simple black and white clothing. They also let hair grow on their face. As a result, Hasidic men have beards.

But in recent years, Matisyahu cut off his beard, and colored his dark hair blond. He also started wearing more colorful clothing. So today Matisyahu does not stand out as much in a crowd.

The street musician did not realize the songwriter was standing nearby when he started playing "One Day."

Music producer Stu Brooks, who plays guitar, was with Matisyahu at the time. He recorded the performance on his phone camera and posted it to Facebook.

The video has over 1 million views since July 31.

Matisyahu joins in with the street musician during the performance and seems to be enjoying the sing-along.

"There'll be no more wars, and our children will play," are some of the words Matisyahu sings in between drinking sips of coffee.

One person who commented on the video said "...this is beyond amazing. So happy to live on a planet where that moment is possible."

Another wrote in, asking "what are the chances?"

At the end of the performance, Matisyahu asks the street musician if he knows who wrote the song. The man answers "Matis." And then Matisyahu points to himself.

The street performer does not recognize him at first, but then says "you look a little different!" The two men laugh and shake hands.

It turns out the singer's name is Clint Alama, and Matisyahu invited him to a show later that night.

Have you ever had a moment like this? We want to hear from you. Write to us in the Comments Section or on 51VOA.COM.

blond – adj. of a yellow or very light brown color

sip – v. to drink (a liquid) slowly by taking only small amounts into your mouth