Update Required To play the media you will need to either update your browser to a recent version or update your Flash plugin.
By VOA
06 June, 2015

Our word today is "maverick."

A maverick describes a person who thinks independently. A maverick refuses to follow the customs or rules of a group to which he or she belongs. In the U.S., a maverick is often admired for his or her free spirit. Although others who belong to the maverick's group may not like the maverick's independent ways.

But where did the name "maverick" come from?

Early in the 1800s, a man named Samuel Augustus Maverick moved to Texas from the eastern United States. Texas was a place of wide-open land, rich soil, cattle ranches and cowboys. Actually, it still is. But back then, it was even more so.

Samuel Maverick had just completed law school. He settled down in Texas and became an important landowner and a politician. In fact, he became mayor for the city of San Antonio. 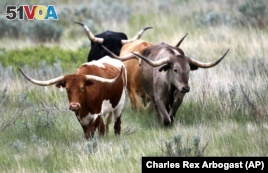 As the years passed, Mr. Maverick added to his property in Texas. Before long, he owned huge pieces of land good for raising cattle. But he had no cattle. He wasn't a rancher.

One day a man came to Sam Maverick to pay an old debt. But the man did not have the money he owed. So, he offered Mr. Maverick 400 cattle. Mr. Maverick accepted them. But, he didn't really want them. He simply turned the cattle loose on his land to eat and care for themselves.

It was not long before the cows reproduced. The calves grew, and had more calves. Soon hundreds of cows and calves moved freely across Sam Maverick's land. They also moved across the land of nearby ranch owners.

It was a tradition among ranchers in the West to put a mark of ownership on newborn calves. They burned the name of their ranch into the animal's skin with a hot iron. The iron made a clear mark called a "brand." Brands allowed ranchers to easily see who owned which cattle.

Sam Maverick refused to brand his calves. Why should he, he asked. If all the other cattle owners branded theirs, then those without a brand belonged to him.

And this is how the word "maverick" got into the American language. It meant a calf without a brand.

As time passed, the word "maverick" took on a wider meaning. It came to mean a person who was too independent to follow even his or her group. Sam Maverick was a maverick in two ways. It was his name, of course. And it described his decision not to follow the tradition of ranchers to brand their cattle.

Sam's grandson, Maury, was also a maverick. He was elected to Congress in 1935.

Maury Maverick was a member of the Democratic Party. But he was an independent thinker. As a Congressman in Washington, he refused to follow his party. In fact, he led a group of progressive Democrats who also disagreed with party leaders. His group was called "The Mavericks," because it refused to wear the Democratic brand.

Besides politics, you can also find mavericks in popular culture. The Mavericks is an American professional basketball team from Dallas, Texas.

In the 1986 movie "Top Gun," Tom Cruise's character is a fighter pilot named Maverick who plays by his own rules. (See movie clip below for an example.)

And a sporty car called the Ford Maverick popular in the 1970s has a nameplate that looks like a cow head.

Now, the word is also becoming a popular name for boys in the U.S. In fact, Maverick is my son's middle name.

You have been listening to the VOA Learning English program, Words and Their Stories.

What is the word for "maverick" in your language? And is it positive or negative? Do share ... in the comments section.

In the scene from the 1986 movie "Top Gun," the pilot who performs a gutsy move is called Maverick. The instructor criticizes his daring, gutsy flight moves and suggests a textbook maneuver, the opposite of a maverick one.

"Unfortunately, the gamble worked. The MiG never got a clean shot. Maverick makes an aggressive vertical move here. Comes over the top and he defeats the Bandit with a missile shot. The encounter was a victory but I think that we've shown it as an example of what not to do. Next ..."

"Gutsiest move I ever saw."

"Now then, this is a perfect example of a textbook maneuver ..."

Words From the Movie Dialogue

maneuver – a movement or series of moves requiring skill and care