Maz Jobrani: Building Cultural Bridges, One Laugh at a Time

Update Required To play the media you will need to either update your browser to a recent version or update your Flash plugin.
By Marsha James
06 July, 2016

The Iranian-American knew early in life that he wanted to become an actor or comedian. His path to stardom was a long journey.

His immigrant story is not unusual. He was born in Iran's capital Tehran, but grew up in America. 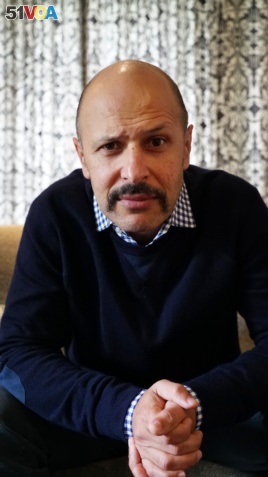 Jobrani came to the U.S when he was six years old, just before the Iranian revolution in 1979. He and his parents moved to California where he attended school.

Jobrani says he grew up around a lot of people that made him laugh. His introduction to acting was an audition for a school play.

"And when I was 12, I ended up trying out for the school play and I fell in love with being on stage..."

Jobrani says he had many friends who were funnier than he, adding to his interest in being a comedian.

"A lot of my friends were the funny people in school. I have friends from when I grew up that were funnier than I was!"

Jobrani tried a conventional career path, studying political science in college and even starting a Ph.D. program at UCLA.

But the comedy of Eddie Murphy was a more powerful influence.

"The reason I'm a comedian is because I'm a fan of comedy. I think what inspired that was Eddie Murphy because back then I used to love watching comedy and I believe I discovered Eddie Murphy probably by watching Saturday Night Live and from there I just wanted to be like Eddie Murphy.'

Now as a full-time comedian, Maz Jobrani uses comedy to bridge the cultural divide caused by Islamic extremism. His performances both ridicule that extremism and challenge American stereotypes of Muslims.

And his recent movie does the same.

He says the film playfully makes fun of American preconceptions of the Middle East.

"You know most people when they see people of Middle Eastern descent on film and television in America, they tend to see people in the news, burning flags and protesting and being anti-American. We wanted to make a movie about a guy who loves America, who wins the green card lottery to come to America from Iran. Who wants to be a cop like his hero Steven McQueen was back in the day when he used to watch Steven McQueen movies. But once he comes to America, he realizes that America of the 21st century doesn't embrace immigrants the way he thought they would and the only job he can find is working as a security guard in a Persian grocery store and from there he has to go on to save the world."

Jobrani also says the movie sends a message to Americans that they have not seen before.

Maz Jobrani can turn that which frightens him into something funny.

For example, the comedian was alarmed when he first heard the phrase "axis of evil." President George Bush used the term to describe Iran, Iraq and North Korea.

But he soon realized it could also make a great name for a series of shows. So, in 2005, the ‘Axis of Evil Comedy' Tour came to be.

The shows featured Jobrani and three other comedians of Middle Eastern descent. The group first appeared on the American television channel Comedy Central.

Jobrani says it is always a good feeling when people laugh at your jokes.

"It's a good feeling because then you realize that it's working, it's relating. The worst feeling is when you're doing stand-up and for whatever reason there is a crowd that doesn't relate to you. Those are the nights when you think to yourself, 'Wow, I can't wait to get off the stage.' But when they get you it's a great feeling and it's probably one of the reasons you stay up there. It's this drug that keeps feeding you. It's kind of like what I would assume surfing could be because every laugh is like a wave. You want to catch that wave and ride it out until the next laugh comes. So whether it's doing stand-up comedy or putting on a movie, your goal as a comedian is to make people laugh."

Life as a comedian has been good for Maz Jobrani. He has appeared in numerous films and television shows. He has toured much of the world and performed for the King of Jordan.

Maz Jobrani also has a bestselling book, ‘I'm Not a Terrorist, But I've Played One on TV." It tells the story about his life in a very funny way.

Test your understanding with this multimedia quiz.

Next on People in America, meet the oldest female bodybuilder Ernestine Shepherd!

stardom – n. the state of being a very famous performer

introduction – n. the act of making a person known to others or to something

audition – n. a short performance to show the talents of someone who is being considered for a role in a play

challenge – n. an action, statement, that is against something

ridicule – n. the act of making fun of someone or something in a cruel or harsh way

preconceptions – n. an idea or opinion that someone has before learning about or experiencing something directly

embrace – v. to accept something readily or gladly

alarmed – v. to worry or frighten (someone)