Update Required To play the media you will need to either update your browser to a recent version or update your Flash plugin.
By Anna Matteo
11 March, 2019

Measles can spread easily from person to person, but it is a fully preventable disease.

The World Health Organization notes that a safe, effective vaccine has protected billions of children against measles over the past 50 years.

However, all that progress is now at risk.

Katherine O'Brien is the director of Immunization, Vaccines and Biologicals at the WHO. She says that progress is at risk because of a failure to vaccinate children in all parts of the world.

"Measles as a virus is one of the most contagious infections that there is. For every case of measles that occurs in a setting where people are not immune, nine to 10 additional cases will occur simply because of exposure to that case."

Measles is a virus. It lives in the nose and throat mucus of an infected person. "It can spread to others through coughing and sneezing," reports the U.S. Centers for Disease Control and Prevention.

Measles is spread through droplets in the air. The virus can live for up to two hours on surfaces where the infected person coughed or sneezed. If other people touch the surface or breathe the same air, they can get sick.

Signs of the disease

Signs of measles include:

A skin rash is the clearest sign that a person has the disease. However, the person can be contagious for up to four days before the rash appears. So, the infected person may not know they are sick and then pass the virus to others.

How many cases worldwide?

The WHO says 229,000 cases of measles were reported last year worldwide. But WHO officials are not sure of the exact number. They say the number of reported cases represents less than 10 percent of actual cases.

So, the disease is infecting millions of other people. And millions are not getting vaccinated. In 2017, the WHO reported that more than 19.9 million people were not protected against the measles.

Katrina Kertsinger is a WHO medical officer in the Expanded Program on Immunization. She says there have been measles outbreaks in all parts of Africa, including the island of Madagascar. 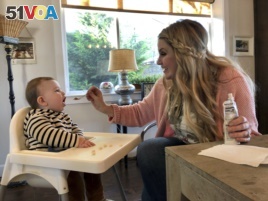 Jocelyn Smith cares for her 11-month-old son, Mason at their home in Camas, Wash., Jan. 30, 2019. Smith has been afraid to take Mason out of the house during a measles outbreak in southwest Washington because he is too young to receive the measles vaccine

Anti-vaxxer movement in the U.S.

In the United States, health officials are urging parents to get their children vaccinated for measles. Some parents object to vaccines for moral, religious, personal or philosophical reasons.

U.S. health experts announced 19 years ago that the disease was no longer a threat to the public. Yet 18 states give parents the right not to vaccinate their children.

One such state is Washington in the Pacific Northwest. A recent outbreak of measles there has health officials working hard to contain it. On February 5, there were 50 cases of measles reported in Washington.

In the U.S., rural areas often have higher numbers of unvaccinated children. But there are also large numbers in some big cities, such as Houston, Austin and Seattle.

Measles makes people very sick, and it is especially dangerous for young children. It can lead to other health problems such as pneumonia or encephalitis. Encephalitis is a swelling, or enlargement, of the brain. It can be deadly or lead to permanent disability.

Doctors, including the U.S. Surgeon General Jerome Adams, are urging parents to get their children vaccinated.

"As the United States Surgeon General, I want everyone to know that the best protection against measles is getting vaccinated."

contagious – adj. having a sickness that can be passed to someone else by touching

exposure – n. the fact or condition of being subject to some effect or influence

mucus – n. a thick liquid that is produced in some parts of the body (such as the nose and throat)

sneeze – v. to suddenly force air out through your nose and mouth with a usually loud noise because your body is reacting to dust, a sickness, etc.

rash – n. a group of red spots on the skin that is caused by an illness or a reaction to something