Update Required To play the media you will need to either update your browser to a recent version or update your Flash plugin.
By VOA
19 January, 2016


Two news organizations say corruption in professional tennis continues because tennis authorities do not stop it.

The reports were released as the Australian Open tennis tournament began this week. The reports say corruption reaches high levels, and includes Wimbledon -- the top tournament in the sport.

The British Broadcasting Corporation and Buzzfeed.com said they had received documents "from inside the sport."

The news reports said that in 2007 the Association of Tennis Professionals, or ATP, found that criminal groups in Russia, northern Italy and Sicily placed bets on matches. Investigators said the matches were fixed so that the criminals won hundreds of thousands of dollars. 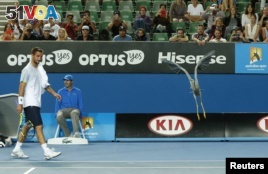 Two news organizations say corruption in professional tennis continues because tennis authorities do not stop it.

Three of the matches reportedly took place at Wimbledon.

The BBC said that a secret report was given to tennis officials. It reportedly said 28 players were involved in match-fixing. But, the news reports said, "the findings were never followed up." It said, for years, "there were repeated alerts sent to the [Tennis Integrity Unit] about a third of these players. None of them was disciplined by the TIU."

The TIU is an organization that investigates corruption in tennis. It has received many accusations against players in the past 10 years, the BBC and Buzzfeed reported.

The tennis association began investigating possible corruption in the sport after a match in Poland in 2007. A British betting company received a large number of bets on the match. Most of the bets were for one player.

His opponent voluntarily left the match even though he was winning. The betting company cancelled all the bets. Neither of the players was charged.

But the news reports said the investigation was expanded. The reports said investigators found that other players were involved in match-fixing. But officials did not investigate further.

Since then, the reports said, the ATP has "repeatedly been warned by betting companies, police and other investigators about many of the same players, but has not taken any action against them," according to the Associated Press.

On Monday, Novak Djokovic -- the world's top-ranked men's tennis player, spoke about an experience he said he had in 2007. Djokovic said people who worked with him were asked if he would accept tens of thousands of dollars to fix a match.

He says he did not accept the proposal.

He said fixing a match would be a crime. "I don't support it," he said. "I think there is no room for it in any sport, especially in tennis."

"It made me feel terrible because I don't want to be...linked to this kind of -- you know, somebody may call it an opportunity," he said.

Djokovic said he thinks the recent media reports are about matches that took place almost 10 years ago. He said active players are not involved. And he said he does not believe there is corruption among the sport's top players.

Roger Federer is one of those top players. He said he wants players suspected of corruption to be named. He said, "then at least it's concrete stuff and you can actually debate about it. Was it the player? Was it the support team? Who was it?" He asked, "how high up does it go? The higher it goes, the more surprised I would be."

The BBC reported that Serena Williams -- the top-ranked women's player – said she did not know of any match-fixing.

She said, "When I'm playing, I can only answer for me. I play very hard, and every player I play seems to play hard."

Chris Kermode is the president of the Association of Tennis Professionals. He said investigators have not found corruption in tennis.

He said "the Tennis Integrity Unit and the tennis authorities absolutely reject any suggestion that evidence of match-fixing has been suppressed for any reason or isn't being thoroughly investigated."

Kermode told reporters that investigators were "vigilant" in the fight against corruption.

He said the sport investigates every corruption report it receives. He said it acts only when there is enough evidence.

Kermode also said TIU investigations have led to punishment against 18 people. They include five players and one official who have been banned from the sport.

Many of those who have been punished were lower-ranked players. Two former Top-50 players who had been banned from the sport were permitted to return by the Italian Tennis Federation last year.

fix – v. to control or affect (something, such as a game or election) in a dishonest way

alert – n. something (such as a message or loud sound) that tells people there is a problem

concrete – adj. relating to or involving specific people, things or actions rather than general ideas or qualities

stuff – n. informal used to speak in a general way about something that is talked about, written about, etc.