Medical Marijuana Is Now Legal in Most US States

Update Required To play the media you will need to either update your browser to a recent version or update your Flash plugin.
By Christopher Jones-Cruise
16 November, 2016


On Election Day in the United States, Arkansas voted to permit the medical use of marijuana. Twenty-seven other states legalized medical marijuana earlier. Eight states now permit its use for non-medical reasons as well.

State officials now will propose measures to govern the growth and sale of marijuana. However, production, sale and use of the drug remains a federal crime.

Jake Bleed is an official at the Arkansas Department of Finance and Administration. He says many people are asking questions connected to the decision on marijuana. 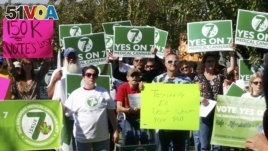 Supporters of medical marijuana gather in Little Rock, Arkansas to support a ballot measure to permit people with some medical problems permission to buy or grow marijuana to ease their symptoms.

"Do people get preference? How do employers deal with these questions? How do state employees apply? There's a lot of questions out there that we're getting, that we're going to have to work through the answers to."

Some people use marijuana to fight pain or discomfort caused by disease. The drug also helps some people deal with the sickness caused by some treatments of disease. It can also be used to ease some effects of brain disorders.

Asa Hutchinson is the governor of Arkansas. He says that federal laws are more powerful than state laws. He says the Obama administration did not order action against states that made marijuana use legal. He said they did not have to fear federal enforcement powers, although the new laws violate federal measures. But he wonders about the president-elect.

"Will the Trump administration have a different approach? We don't have the new attorney general yet -- what will be their approach?"

The economies of some states have improved where medical and recreational use of marijuana is permitted. Governments have collected hundreds of millions of dollars in new taxes. That, and public demands, means more states will likely consider legalizing marijuana use.

preference – n. an advantage that is given to some people or things and not to others

approach ­– n. a way of dealing with something; a way of doing or thinking about something