Update Required To play the media you will need to either update your browser to a recent version or update your Flash plugin.
By Jill Robbins
05 May 2020


Every night at seven o'clock, New Yorkers step outside their homes to cheer for the medical workers who are treating coronavirus patients. Horns from automobiles and police vehicles add to the cheering.

Some New York restaurants are making meals for doctors and nurses working in the city's hospitals.

Last week, U.S. military airplanes flew over New York and other cities as a show of thanks to healthcare workers. 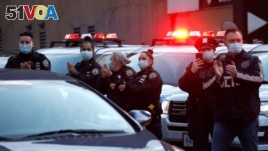 With all these expressions of thanks, reports of attacks on healthcare workers are surprising.

The World Health Organization, or WHO, and top nursing officials have called on countries to protect nurses and other health workers from physical and verbal attacks. They note that these men and women are already making sacrifices in their lives every day to fight the coronavirus pandemic.

Howard Catton is head of the International Council of Nurses. He said that about 100 medical workers are reported to have died from COVID-19, the disease caused by the new coronavirus. Many nurses were among the dead. Catton spoke to reporters last week.

Even before the virus began to spread, many nurses had difficult jobs. About 28 million people work as nurses. That represents 59 percent of all health workers worldwide.

Last week, WHO officials, the Nursing Now campaign, and the International Council of Nurses released the first "State of the World's Nursing Report."

The report says there are not enough nurses in many areas. The nursing shortages are mainly in low- and lower-middle income countries, it noted.

The number of new nurses does not meet the expected needs in many countries, the report said. It points to some countries where many nurses are nearing retirement age. It said that trained health workers must be ready to do the work of those who have retired.

The report estimates eight percent more workers will be needed each year.

Nursing shortages are an issue in many parts of Africa, in Afghanistan, Pakistan, Yemen and Venezuela, the report added.

Although nurses make up the majority of all health workers, the report says their value is not recognized. It notes that 90 percent of nurses are female, and they are often victims of discrimination in the workplace. One surprising fact is that a little over a third of countries – thirty-seven percent - reported measures in place to prevent attacks on health workers.

Some workers have been attacked during the COVID-19 crisis because people fear contagion. A nurse in Mexico reported that someone threw a mixture of water and chlorine at her as she walked home.

Howard Catton said there have been reports from around the world of abuse of health workers.

"It is completely unacceptable," Catton said. He called for governments to stop such abuse and to make sure that public health messages are clear and fact-based.

The WHO's Giorgio Cometto said it was a relatively new experience for people to see health workers as a possible risk, "as opposed to being a solution to the current crisis." He added that in the current pandemic, it is very important to take the necessary steps to protect health workers.

Baroness Mary Watkins, chair of Nursing Now, noted nurses have been attacked in the past. That was during outbreaks of Ebola and HIV, the virus responsible for the disease AIDS.

Watkins said "there has been a very, very clear directive from the police in many countries that attacking a health care worker is unacceptable. We need to keep pressure up," she added.

Stephanie Nebehay reported on this story for Reuters. Jill Robbins adapted it for Learning English. George Grow was the editor.

horn – n. a sound made by a car or truck

pandemic – n. a disease that has spread over a whole country or the world

contagion – n. the process by which a disease is passed from one person or animal to another

outbreak – n. the sudden or violent start of something unwelcome, such as disease

How are medical workers treated where you live? We want to hear from you. Write to us in the Comments Section.