Meet the First American to Get a Gender Neutral ‘X’ License

Update Required To play the media you will need to either update your browser to a recent version or update your Flash plugin.
By Bryan Lynn
09 July, 2017


Washington DC was the first city in the United States to issue gender neutral driver's licenses and identification (ID) documents.

The new policy went into effect June 27. It allows people to choose "X" as their gender if they do not identify as either male or female.

Previously, Washington DC residents seeking a driver's license or identification card had to choose "M" for male of "F" for female. This has also been the requirement in other American states. 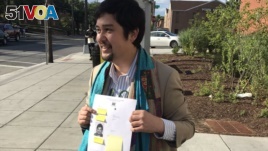 Many countries allow people to choose a neutral gender on official documents, including passports. These include Australia, Germany, Bangladesh, India, Nepal, Pakistan and New Zealand. The U.S. government does not issue passports for people who identify as neither male nor female.

The new policies in Washington DC and Oregon allow people to report gender identification themselves. They no longer have to have a doctor or social worker confirm their choice.

"I was really excited to get a government identification that legitimized who I am, that made me feel included and that my government sees me."

Sakurai does not identify as either male or female and chooses to use the pronoun they/them.

Unlike some countries, the United States does not have a national ID, so the driver's license is required for many uses. Sakurai said while some people might be confused when they see the "X," it can be a good way to educate about the issue.

"For me, it's the knowledge that I have the backing of my local government that they understand that there are more than two genders or sexes. And by displaying the document, I can use that to initiate a conversation."

One organization working closely with Washington DC officials on the change was the National Center for Transgender Equality. The group called the policy change a "tremendous first step" in recognizing a growing part of the population.

Mayor Muriel Bowser said the new policy is in keeping with Washington DC's commitment to improve rights for all members of the LGBTQ (Lesbian, Gay, Bisexual, Transgender or Questioning of their sexuality) community. "The safety and well-being of all Washingtonians is my top priority," she said in a statement.

LGBTQ groups have said that allowing the "X" option on official documents will help reduce discrimination and raise awareness of gender identity issues.

In 2015, the National Center for Transgender Equality did a survey involving more than 27,000 transgender Americans. About 68 percent of those surveyed said none of the official ID documents they had included the name and gender they desired.

Some said they experienced some form of discrimination when showing an ID that did not match the gender they presented. About 32 percent said they faced verbal harassment, assault or were denied service or asked to leave.

Sakurai responded to criticism by some that gender neutral policies are an attempt to invent new genders that never existed before.

"These kinds of experiences are not new. And of course in many countries and cultures there's a long history of thousands of years of recognizing the existence of more than two genders - maybe it's three or four or five - or not having as strict of a gender system or way of thinking about gender."

Sakurai sees the gender "X" policy as a great step forward, but not something that will stop all problems related to discrimination.

license – n. official document giving permission to do something

designate – v. choose someone or something for a particular purpose

confused – adj. not able to understand or think clearly

transgender – adj. of or relating to people who feel their true nature does not match their sex at birth

harassment – n. to annoy, bother or attack someone

assault – v. the crime of trying or threatening to hurt someone physically

strict – adj. not allowing rules to be broken