Meet the Man Who Directs Rebel Violence in the Philippines

Update Required To play the media you will need to either update your browser to a recent version or update your Flash plugin.
By Christopher Jones-Cruise
11 July, 2017


Philippine government troops have been fighting Muslim rebels in the country's south for two months.

The troops are searching for a man wanted for his leadership of a terrorist group for the past 20 years.

He is wanted in both the Philippines and the United States.

Troops believe Isnilon Totoni Hapilon may be hiding in the heavily damaged city of Marawi. Troops attacked the city in late May because they feared his historically violent group -- Abu Sayyaf -- was joining with another rebel group. 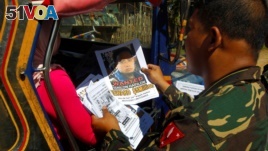 FILE - Soldiers distribute pictures of a member of extremist group Abu Sayyaf, Isnilon Hapilon, who has a U.S. government bounty of $5 million for his capture, in Butig, Lanao del Sur in southern Philippines, Feb. 1, 2017. (REUTERS/Marconi B. Navales)

Hapilon thought to be in Marawi area

Hapilon's death or capture would end the influence of a man who has helped lead Abu Sayyaf since 1997. The group is known for kidnapping foreigners and executing some of them. Some observers believe he has recently tried to extend his influence to other Muslim anti-government rebels to earn respect from the Islamic State group.

The United States brought charges against Hapilon after Abu Sayyaf kidnapped 20 people in 2001 and cut off the head of an American. The U.S. government will pay up to $5 million for information that helps in the capture or jailing of the 51-year-old man.

The Federal Bureau of Investigation (FBI) says Hapilon might be able to travel to Malaysia and Saudi Arabia. The FBI says he successfully completed an engineering study program at the University of the Philippines. But Philippine media report that the university has no record of him.

In June, the media reported that President Rodrigo Duterte said the country would pay about $344,000 for the "neutralization" of Hapilon.

Eduardo Araral teaches at the National University of Singapore, but grew up on the Philippine island of Mindanao. He says Hapilon is "a legend for his exploits in kidnapping high-profile tourists and as a result he's got lots of money, and money has bought him a lot of guns and followers."

The Counter Extremism Project say Hapilon has moved to the Philippine province of Lanao del Sur to create an Islamic State caliphate.

Three years ago, Hapilon said he would support the Islamic State. Last year the group declared he was its "emir" in Southeast Asia.

Establish ties with other Muslim groups

By May, Hapilon had reached Marawi, a mostly Muslim city and home to 200,000 people. He had planned to establish ties to a four-year-old militant organization called the Maute Group. Government officials say that is why they sent troops to the city. An armed forces spokesman reported last Friday that 353 "terrorists" and 87 government troops have died in the fighting.

Ramon Casiple is the head of the Institute for Political and Electoral Reform in the Philippines. He says Hapilon wants to work with the Maute Group to extend the influence of Abu Sayyaf and win praise from the Islamic State (ISIS).

"Marawi is actually the first coordinated operation that they have and it's more propaganda than anything else," Casiple said. "At this point in time, they're trying to convince ISIS they can really represent all of Southeast Asia. Because of his Abu Sayyaf background, he already has contacts with the Al-Qaida network in Southeast Asia."

Eduardo Araral notes that if Hapilon is captured or killed, Abu Sayyaf would go through a time of "splintering." Experts say 19 other Muslim rebel groups also operate around the Sulu Sea and Mindanao, where terror-related violence has caused the deaths of about 120,000 people since the 1960s.

Ethnic Moro followers of Islam who reached Mindanao centuries ago resent the country's Christian majority. The Muslims believe they do not have the same rights as Philippine Christians. The southern part of the country has been poor for years. Anger about this has produced some of the rebel groups.

Ralph Jennings in Taipei reported this story for VOANews. Christopher Jones-Cruise adapted the report for Learning English. George Grow was the editor.

neutralize – v. to stop (someone or something) from being effective or harmful

exploit – v. to get value or use from (something); o use (someone or something) in a way that helps you unfairly

caliphate – n. the area ruled by a caliph; the rule or reign of a caliph or chief Muslim ruler.

splinter – v. to divide or split a group of people into smaller groups

resent – v. to be angry or upset about (someone or something that you think is unfair)