Update Required To play the media you will need to either update your browser to a recent version or update your Flash plugin.
By VOA
19 December, 2014


A two-day meeting in Laos has left government officials and environmental activists deeply divided. The meeting was called to examine plans for a 260 megawatt dam on the Lower Mekong River. The Lao government is prepared to start work on the project.

Lao officials have dismissed concerns over the dam's effect on the Mekong Delta area.

The proposed Don Sahong hydropower dam would be built in the southern province of Champassak. If built, it would become one of nine dams for the Mekong River's mainstream in Laos or along the border with Thailand. 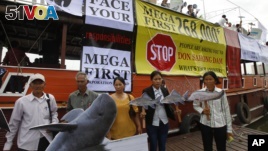 FILE - Cambodian non-governmental organization (NGOs) activists hold a cut-out of Mekong dolphin, left, and cut-out of other species during a protest against a proposed Don Sahong dam, in Phnom Penh, Cambodia.

Laos is heavily dependent on earnings from about 10 hydropower plants. They were largely built on waterways within Laos since the 1990s. They produce some 2,000 megawatts of power for domestic use and for export to Thailand.

But two big new dams have fueled debate. One is the $3.8 billion Xayaburi dam in northern Laos. The other is the $600 million Don Sahong planned for Chamapssak province.

Environmentalists are worried the two dams could affect water flow and the movement of migratory fish.

Viraphonh Virapong is Laos' vice minister of Energy and Mines. He says the government is ready to develop clean, renewable hydropower, despite criticisms.

Last week, the intergovernmental Mekong River Commission led discussions on the effect of the projects.

Critics say there are serious questions about whether this consultation process is worthwhile. Robert Mather is South East Asia head for the International Union for the Conservation of Nature.

"Three main issues - the timing of the process, the lack of clarity about really the limits of what the process is actually about and the lack of any real trans-boundary (Environmental Impact Assessment) EIA discussions around, then I really don't think you can expect the process to really yield anything meaningful."

The consultation process for the Don Sahong project will last only six months. The government in Laos sees the meetings as a way to clarify problem areas involving the building of the dams. But critics say the talks should raise issues leading to the project being stopped.

Premrudee Daorung is with Thailand's Towards Ecological Recovery and Regional Alliance. She says talks are failing to deal with these issues. She notes that few communities dependent on the Mekong River for their food and livelihoods are involved in the process.

"What we keep requesting is that the MRC itself, with its agenda, it has to include the local people; you cannot keep going along with the project or the platform that only allows so-called dam builders to attend."

Throughout the Greater Mekong area, up to 60 million people are dependent on fish and free flowing waters. Flood water runoff is needed to enrich soil for agriculture, especially rice.

Vietnam has been pressing Laos over Don Sahong project. Vietnamese officials fear the project might harm the Mekong Delta, the country's ‘rice bowl' and home to 20 million people.

Vietnam say the dam will lead to greater water salinity and the washing away of soil.

The Mekong River Commission says national meetings are set to be held in Vietnam, Thailand and Cambodia, before final decisions are made on the project.

This story came from reporter Ron Corben in Bangkok. Marsha James wrote it for VOA Learning English. George Grow was the editor.

megawatt - n. a unit of electrical power equal to one million watts

disrupt – v. to interrupt the normal progress or activity of something