Update Required To play the media you will need to either update your browser to a recent version or update your Flash plugin.
By Bryan Lynn
12 June, 2017

She and the boy had been living at the family's home at Trump Tower in New York so Barron could finish out the year at his current school.

In keeping with American tradition, President Trump moved to Washington, DC immediately after he took office in January. Since then, he has lived in the White House -- one of the most famous buildings in the world.

Melania Trump announced the move Sunday on Twitter. She wrote, "Looking forward to the memories we'll make in our new home! #Movingday." Her announcement included a picture of the Washington Monument as seen from a room inside the White House.

The president spent last weekend away from the White House. He went to one of his golf properties in the state of New Jersey.

Melania Trump has not been as visible as other presidents' wives since choosing to stay with Barron in New York. But she has slowly begun taking on more official White House duties. She also recently joined the president on his first major overseas trip.

Her move to Washington was expected. Trump had repeatedly said his wife and son would be joining him in the White House after the current school year. Barron has been attending Columbia Grammar and Preparatory School in New York City. 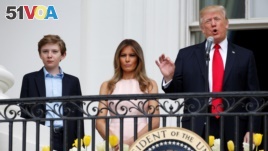 Melania Trump announced last month that Barron would begin attending a private school just outside of Washington, in the state of Maryland, later this year. The school, Saint Andrew's Episcopal School, is about 30 kilometers from the White House.

In a statement at the time, the first lady said the family chose St. Andrew's because of its commitment "to know and inspire each child in an inclusive community." She added that the school's program combines teaching, learning and service, "all of which appealed to our family."

The cost for Barron to attend the school is reported to be about $44,000 a year, about the same cost as his former school in New York.

Chelsea Clinton also attended Sidwell Friends while living in the White House during the presidency of Bill Clinton.

Bryan Lynn adapted this story for VOA Learning English. His story was based on reports from the Associated Press and Reuters. George Grow was the editor.

commitment – n. promise or pledge to do something

first lady – n. the unofficial name used for the wife of a president