Update Required To play the media you will need to either update your browser to a recent version or update your Flash plugin.
By Ashley Thompson
02 October, 2018


Melania Trump has begun her first solo international trip as the first lady of the United States. She arrived Tuesday in the West African country of Ghana.

Ghana's first lady, Rebecca Akufo-Addo, welcomed her at the airport in Accra. A young girl offered her a gift of flowers wrapped in a traditional cloth. Dancers and drummers performed and young children waved small American and Ghanaian flags.

The White House says the first lady's five-day visit to Africa will center on "maternal and newborn care in hospitals" and "education for children."

Shortly after her arrival, Trump visited the Greater Accra Hospital. There, she toured the neonatal intensive care area, visited with mothers, held babies and gave patients blankets and playthings donated by the White House. 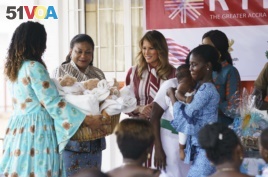 Trump later had a private meeting with first lady Akufo-Addo. The two met for about 30 minutes at Ghana's presidential palace.

Many past American first ladies have also made trips to the African continent, including Michelle Obama, Laura Bush and Hillary Clinton.

Locals who spoke with reporters in Accra said they did not know much about Trump's visit.

One worker at a popular shop near the airport told Reuters, "I did not know she's in town until I heard about it on the radio a few minutes ago."

Another shopkeeper said to the Associated Press, "Did you say President Trump's wife just arrived in Accra? I don't think I have ever heard her name, Melania."

Others said they knew about Trump's visit but did not know what she would be doing.

The first lady's visit to Africa could be made difficult because of the past actions and words of her husband. President Donald Trump reportedly used a vulgar and insulting term to describe African nations.

Judd Devermont, the Africa program director at the Center for Strategic and International Studies, said the first lady may have to do "some heavy lifting" on her trip. In other words, the trip may involve serious or difficult work.

Devermont told VOA, "It's a little bit unfair because that's not what a first lady's trip should be about."

But Africa policy expert Joshua Meservey said he does not think the president's reported comments will affect the first lady's visit. He is with The Heritage Foundation in Washington, D.C.

Meservey told VOA, "I think the U.S.-Africa relationship is much bigger than the president's comments."

After Ghana, the first lady will travel to Malawi, Kenya and Egypt.

Ashley Thompson adapted this report based on articles by the Associated Press, Reuters and VOA News. Caty Weaver was the editor.

solo - adj. something that is done without another person

maternal - adj. of or relating to a mother

neonatal - adj. of, relating to, or taking care of babies in the first month after their birth

vulgar - adj. not having or showing good manners, good taste, or politeness