Update Required To play the media you will need to either update your browser to a recent version or update your Flash plugin.
By VOA
21 June, 2018

American first lady Melania Trump wore a piece of clothing that read "I really don't care, do u?" on her way to visit migrant children at a holding center in Texas. Some of the young people were children taken from their parents at the U.S. border with Mexico.

The green, military-style jacket is from the clothing seller Zara. The words were written in large white letters on the back. 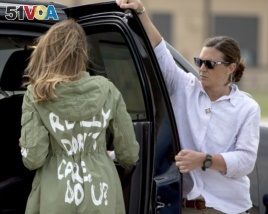 First lady Melania Trump walks to her vehicle as she arrives at Andrews Air Force Base, Md., Thursday, June 21, 2018, after visiting the Upbring New Hope Children Center run by the Lutheran Social Services of the South in McAllen, Texas. (AP)

Melania Trump's spokeswoman, Stephanie Grisham, was asked to about the message on the clothing. She answered, "It's a jacket. There was no hidden message. After today's important visit to Texas, I hope the media isn't going to choose to focus on her wardrobe. "

Grisham underscored that message in a tweet with the hashtags #SheCares and #ItsJustAJacket.

However, a tweet from President Trump suggested there was a message. He wrote: "I REALLY DON'T CARE, DO U?" written on the back of Melania's jacket, refers to the Fake News Media. Melania has learned how dishonest they are, and she truly no longer cares!"

Trump changed into a different jacket before her plane landed in McAllen, Texas. She visited the Upbring New Hope Children's Center there. It is holding 55 of the thousands of children under U.S. government supervision.

The first lady's jacket quickly made her a trending topic on Twitter.

Media personality Toure wondered in a Tweet whether Melania Trump or those around her gave much thought to the message on the jacket. He posted: "I'm confused about Melania's jacket. I don't believe she really meant to say she doesn't care. I don't buy that she's that callous. But I don't believe that neither she nor her staff realized the message she was sending. They all can't be that clueless. So, I'm confused."

Zara is a Spanish-based company with a large presence in the United States and around the world. It had no comment on the story. The jacket belongs to the company's spring-summer 2016 season.

It is not the first time Melania Trump's fashion choices have been criticized. Last August, the media and public discussed the high-heeled shoes she wore to fly to Texas to view Hurricane Harvey destruction. She had changed into white sneakers by the time she and the president landed.

jacket - n. a piece of clothing that is worn on your upper body over another one like a shirt

focus - v. to direct your attention at something

wardrobe - n. a collection of clothes that a person owns or wears