Update Required To play the media you will need to either update your browser to a recent version or update your Flash plugin.
By Dan Novak
27 November 2021


Greenland's glaciers continue to melt away because of rising global temperatures. But the melting ice might provide a way to lessen the impact of climate change.

As the ice melts, it deposits tiny silt. Silt is very small sand, mud or other material carried by running water.

"It's a kind of wonder material," said Minik Rosing. He is a native Greenlander and professor at the University of Copenhagen.

Called glacial rock flour, the silt is crushed to tiny particles by the weight of the melting ice. One billion tons of the silt is deposited it per year on Greenland, the world's largest island.

Rosing and his team have found the nutrient-rich mud improves plant growth when used in farms. It also absorbs carbon dioxide from the air in the process.

Researchers from the University of Ghana were able to increase corn production by 30 percent using glacial rock flour. The flour decreased the effect of rain and heat on poor farmland.

The tiny size of the silt's particles is what allows plants more access to nutrients, including potassium, calcium and silicon compared to normal, rocky farmland.

"We are the stage in this project where we definitely know that it works," Rosing said. "There are many barriers between this and a big scale industry, but the potential is definitely there." 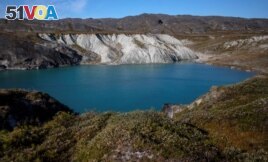 The tiny size of the silt's particles also helps speed up a natural process in which rocks absorb carbon dioxide (CO2).

When the silt dissolves in rainwater and releases its nutrients, a chemical reaction occurs that absorbs carbon dioxide from the atmosphere. The silt is eventually deposited in the sea.

The idea of putting tiny rock in farmland is not new. But the method has gained more interest because of the discovery that it can absorb CO2.

"That realization has been a catalyst for a lot more research in this area," said David Beerling. He is a professor at the University of Sheffield and head author of a study on crushed basalt, a tiny volcanic rock.

The study found that spreading finely crushed basalt on fields, as well as helping crops to grow, removes CO2 from the atmosphere. And it does so at a cost about equal to other methods of carbon capture.

Such detailed research has not been done for glacial rock flour. But tests by the scientists in Copenhagen found that one ton of glacial rock flour would accept between 250 and 300 kilograms of CO2 when applied to fields. That may also permit farmers to sell that as carbon credits.

Greenland's new government hopes the silt can one day can help the economy as well as permit the country to move away from some kinds of mining.

"We don't need to blast off the top of a mountain or build a processing plant," Greenland's resources minister told possible investors in September.

Government officials will present the mineral at a mining meeting in Vancouver early next year, but say commercial mining and use could be years away.

Studies show that the best farmland, which is across parts of North America and Europe, was covered by ice during the last ice age. Just as in Greenland today, the thick layer of ice has made the soil healthier.

"In Northern Europe, we think the reason we're better off than the rest of the world is that we are so much smarter than everyone else. In fact, we just have better soil," Rosing said.

Jacob Gronholt-Pedersen reported this story for Reuters. Dan Novak adapted it for VOA Learning English. Susan Shand was the editor.

deposit — n. an amount of something (such as sand, snow, or mud) that has formed or been left on a surface or area over a period of time

absorb — v. to take in (something, such as a liquid) in a natural or gradual way

dissolve — v. to mix with a liquid and become part of the liquid

catalyst — n. a substance that causes a chemical reaction to happen more quickly

blast — n. a mass of air that moves very quickly and forcefully

commercial — adj. related to or used in the buying and selling of goods and services