Update Required To play the media you will need to either update your browser to a recent version or update your Flash plugin.
By Hai Do
27 October 2021

The move, announced Wednesday by a health organization supported by the United Nations, is aimed at helping people in poorer countries to get the drug.

The Medicines Patent Pool, or MPP, said in a joint statement that the agreement will make the drug molnupiravir available "in 105 low- and middle-income countries." The drug also will need approval from local health officials. 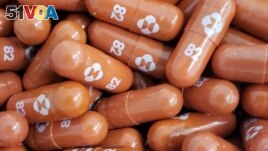 An experimental COVID-19 treatment pill called molnupiravir, being developed by Merck and Ridgeback Biotherapeutics is seen in this undated handout photo.

Under the agreement, the health agency is permitted to license qualified companies to manufacture the antiviral drug. Merck and its partners, Ridgeback Biotherapeutics and Emory University in Georgia, will not receive money for sales of molnupiravir as long as the World Health Organization considers COVID-19 a "Public Health Emergency of International Concern."

In early October, Merck reported that its experimental pill reduced hospitalizations and deaths by half among people infected with COVID-19 in a drug trial. The company is asking health officials in the United States and around the world to approve the pill for treatment of coronavirus infections.

Pfizer and Roche, two other drug companies, are also working on similar COVID-19 pills. But molnupiravir could be the first pill approved for the treatment of COVID-19. A pill can be taken at home and is easier to send around the world. All other approved COVID-19 treatments must be injected by healthcare workers.

Charles Gore is the Executive Director of MPP. He said early results of the drug were "compelling." Gore said the pill is an "important tool" to help deal with the current health crisis. He said he hoped the agreement will lead to others.

Yuanqiong Hu is a senior legal and policy adviser with MSF. She said the license does not include nearly half of the world's population in countries like Brazil and China. The two also have "strong, established capacity to produce and supply antiviral medicines."

Hu noted the license would also limit "the production and supply of more affordable and available generic molnupiravir."

The company is also working with several Indian companies to license cheaper, generic versions of molnupiravir for low- and middle-income countries. Researchers at Harvard University's T.H. Chan School of Public Health estimated that a generic version could cost less than $20 for each treatment.

Last week, the Bill & Melinda Gates Foundation announced that it would spend up to $120 million to help develop generic versions of molnupiravir.

"To end this pandemic, we need to ensure that everyone, no matter where they live in the world, has access to life-saving health products," said Melinda French Gates, co-chair of the Gates Foundation, in a statement.

Hai Do wrote this report for VOA Learning English. Mario Ritter, Jr. was the editor.

pill –n. a small, rounded object that you swallow and that contains medicine, vitamins

license –n. a legal agreement that permits someone to do, use or manufacture something

compelling –adj. capable of causing someone to believe or agree

capacity –n. the amount of something that can be produced by a factory or company

affordable –adj. able to pay for something

generic –adj. not sold or made under a brand name; a lower-cost version of some basic product

access –n. the ability to get something, enter a place or meet someone