‘Mermaid’ Subculture Relates to Many Things

Update Required To play the media you will need to either update your browser to a recent version or update your Flash plugin.
By Faith Pirlo
15 July 2022


Around the world, people of many backgrounds are taking an interest in mermaids.

Mermaids are imaginary sea creatures that are half woman and half fish.

The 1989 Disney film, The Little Mermaid, increased the popularity of mermaids and "merfolk," the word for imaginary men and women who live under the sea and have fish tails. 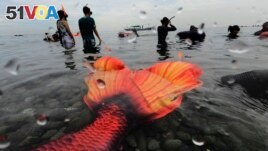 The mermaid tail of Queen Pangke Tabora rests as a freediving class is conducted. Across the world, there are thousands more merfolk like her - at its simplest, humans of all shapes, genders and backgrounds who enjoy dressing up as mermaids. (AP Photo/Aaron Favila)

Freedom and acceptance are why a lot of people are drawn to mermaiding.

Che Monique is the founder of the Society of Fat Mermaids based in Washington, D.C. The group supports mermaiding that does not judge people on the appearance of their bodies. Monique said the activity of mermaiding has changed people's lives although it might seem really silly to others.

"I'm a 300-pound Black mermaid in America over 35, and hopefully that tells somebody they can do whatever they want to do." Monique added, "I think there's room under the sea for all of us."

Some people enjoy the costumes or mermaid tails. The tails are colorful and glittering. Images on social media of the tails have helped to increase mermaid popularity.

When mermaiding first became well-known, tails cost a lot of money — up to $6,000 — because they were made for each person's body. They also weighed up to 23 kilograms. Tails now cost less than $100 because of their increased popularity and low-cost materials.

Thirty-one-year-old Marielle Henault is the chief executive of AquaMermaid. The company runs mermaiding schools in Canada and the United States. She sells mermaid tails to merfolk all over the world. She has 20 tails that she owns herself.

"When you put your mermaid tail on at the beach or pool, you become a superstar," Henault said, "Kids and adults, everybody's happy to see a mermaid!

How do they swim?

Swimming as a mermaid requires the use of a special kind of equipment called a monofin. Users place both feet into the fin so they can swim. The mermaids must also learn a special kind of swimming method called a dolphin kick. Using this method, a person moves both feet together like a dolphin. They must also equalize the pressure in their ears as they swim under water.

There are events and competitions like the World Mermaid Championship, which was last held in China in 2019. In the state of New York, the yearly Coney Island Mermaid Parade recently took place.

Henault wants to help get mermaiding into the Olympics, possibly as a demonstration sport. Recently, mermaids have created their own "Merlympics" in Britain and Europe.

Mermaiding is popular with some transgender people. These are people who believe their true identity is the sex other than the one they were at birth. Some of them identify with the character of Ariel from The Little Mermaid. Ariel felt trapped as a mermaid and sought life among humans.

Mermaid Nymphia is a professional mermaid and a transgender adult. Nymphia said The Little Mermaid is popular with some of the LGBTQ community because Ariel wants to change into a human.

"With transgender and nonbinary merfolk, they often connect with that mentality where you're not quite sure which world you belong in," Nymphia said.

Many people have found acceptance in the mermaid community.

Tabora, from the Philippines, is transgender and teaches at a mermaiding school called DIVERSity by SeaReynang Pengki.

"As transgender, it's a transition. It's like in the sea, everything evolves. The fish evolve, the coral evolves," Tabora said.

However, safety concerns are increasing, from strangers on the internet, people selling false products, and swimming safety problems.

Kelly Hygema is the creator of a social media group that supports internet safety for mermaids. She said that it is important to always have someone you can trust with you while you are in the water with a tail.

"With your legs bound, you can't really run away, so it's important to have that set of legs there to make sure you're OK," Hygema said.

Some groups have raised safety concerns over the tails. In 2018, the Royal Life Saving Society of Western Australia studied the effects of mermaiding on 25 children. It found that the majority of them had experienced a decrease in swimming ability of 70 percent with the monofins and 60 percent with the tails.

In the United States, the U.S. Consumer Product Safety Commission said, in the past four years, it has received three incident reports involving mermaid tails, one involving a five-year-old girl becoming trapped underwater. The girl had put her arms and legs in the tail. She went to the hospital after the incident.

Lauren Metzler is the founder of Sydney Mermaids. She recently received a mermaid certification, a kind of official approval. Her goal is to teach inexperienced mermaids how to swim underwater and avoid sinking.

The importance of community

For many merfolk, the pastime is all about being part of a community and having fun, especially after COVID-19 restrictions.

Merman Maui said, "I have a new family with all these people."

Metzler, who hopes to train mermaids, said people should open up their imaginations. "The sky — or ocean floor — is the limit of what you can do with mermaiding," she said.

Kristen Gelineau wrote this article for The Associated Press. Faith Pirlo adapted it for Learning English.

costume –n. clothes that are worn to try to look like something different

norm – n. behavior that is usual or expected

nonbinary – adj. describing someone whose gender identity is not completely male or female

mentality – n. a person's opinions or way of thinking

transition – n. to act of changing from one state or condition to another

bound – adj. restricted or tied up with rope or some other material