‘Justice’ Is Merriam Webster’s Word of the Year

Update Required To play the media you will need to either update your browser to a recent version or update your Flash plugin.
By Pete Musto
17 December, 2018


Merriam-Webster, the American publisher known for its dictionaries, has chosen "justice" as its 2018 word of the year.

The word follows "toxic," chosen by Oxford Dictionaries, and "misinformation," the choice of the website Dictonary.com.

Peter Sokolowski is editor-at-large at Merriam-Webster. He told The Associated Press that the word "justice" kept entering the top 20 or 30 search terms on the company's website. 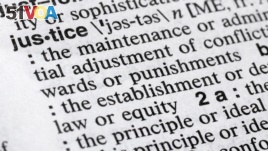 In this December 12, 2018, photo, "justice" is shown in a Merriam-Webster dictionary in New York. (AP Photo/Mark Lennihan)

Searches for "justice" greatly increased because of world events, he added. But the word stayed close to the top of the list of searches for much of the year.

Sokolowski noted "justice" is a common word people likely know how to spell and use correctly in a sentence. Such well-known words are often among the most looked up every year, he said.

The choice for "justice" as word of the year came soon after lawyer Michael Cohen was sentenced to three years in prison. He formerly represented American President Donald Trump.

Cohen was found guilty of crimes that included helping to organize payments to cover up Trump's reported relationships with women other than his wife.

The word of the year announcement came before a U.S. Senate vote on the "First Step Act." That is the name of a criminal justice reform bill, which has support from the two main political parties.

Justice will likely remain a concern for many Americans going into 2019. Sentencing for drug crimes, easing of cannabis laws, and the investigation into Russian involvement in the 2016 U.S. elections are all major issues in the country.

"These are stories that connect to the culture and to society across races, across classes," Sokolowski said. "We get this word that filters in."

Often, when Trump writes tweets about the Department of Justice, he uses simply the word "Justice." On August 1, when he noted his wish for then-Attorney General Jeff Sessions to stop the Mueller investigation, searches increased greatly. Trump used the term "obstruction of justice," a separate entry on the Merriam-Webster website. This led to a search increase of 900 percent compared to the same date one year earlier.

The Merriam-Webster site has more than 100 million page views a month and almost 500,000 entries, Sokolowski said. The searches for "justice" throughout the year were up 74 percent when compared to 2017. To be word of the year worthy, an entry has to show both a large amount of traffic and a notable year-over-year increase in searches.

"We looked at our data and we were ourselves surprised by this word," Sokolowski said. "This is a word that people have been thinking about for this entire year."

The word "justice" comes from Latin, unlike a lot of the more emotional words that rose in Old English. Old English did have "law," ″fair" and "right," but never "justice," relating to a system of laws.

A few other words that experienced search increases in 2018 were "respect," "pansexual" and "nationalism." "Respect" is the name of one of the most well-known songs by Aretha Franklin, who died in August. "Pansexual" is the term singer Janelle Monae used to describe her sexual identity when she spoke with Rolling Stone magazine. And at a mid-term election campaign event in October in Texas, Trump declared himself a "nationalist."

We want to hear from you. Which word do you think should have been the 2018 word of the year? Write to us in the Comments Section or on 51VOA.COM.

dictionaries – n. reference books that contain words listed in alphabetical order and that gives information about the words' meanings, forms, and pronunciations

misinformation – n. information that is not completely true or accurate

editor-at-large – n. a person whose job is to prepare something written to be published or used

spell – v. to say, write, or print the letters of a word or name

cannabis – n. a drug such as marijuana or hashish that comes from the hemp plant and is smoked illegally

filter(s) in – p.v. to come or go slowly in small groups or amounts

page view(s) – n. an instance of an Internet user visiting a particular page on a website

pansexual – adj. not limited in sexual choice with regard to biological sex, gender, or gender identity.

nationalism – n. a feeling that people have of being loyal to and proud of their country often with the belief that it is better and more important than other countries