Update Required To play the media you will need to either update your browser to a recent version or update your Flash plugin.
By Dan Friedell
04 May, 2016


A 5-year-old Afghan boy who became world famous earlier this year has fled his country because of safety concerns.

A photograph of Murtaza Ahmadi first appeared on the Internet in January. He was wearing a homemade soccer jersey that looked like the one worn by Lionel Messi, the Argentinian soccer star.

The boy's brother made the shirt from a blue-and-white striped plastic bag. The bag had the name "Messi" and number 10 written on the back. 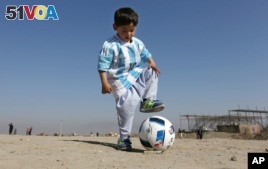 Murtaza Ahmadi, a 5-year-old Afghan Lionel Messi fan plays with a soccer ball. He and his family recently moved to Pakistan due to safety concerns.

The photograph spread quickly on the Internet. Eventually, Messi himself heard about the boy and sent him a soccer ball and signed jerseys.

The story seemed to have a happy ending.

But after the news spread, the Ahmadi family started receiving threatening telephone calls and even a letter from the Taliban.

The Associated Press says the Taliban have yet to comment on the boy's case.

Murtaza's father said that at first he was not sure who was responsible for all the phone calls. At first, he thought it might have been criminals who falsely thought the family made a lot of money from the boy's fame.

About one month ago, the family of eight quietly fled to Pakistan. They left behind all of their belongings. They are currently living in a one-room house in the city of Quetta.

But Murtaza Ahmadi has not given up on soccer. Some days, the boy goes to a nearby field to play a game with his family.

His father adds that Murtaza still hopes that one day he will be able to meet his hero, Lionel Messi.

What do you think of Murtaza Ahmadi's story? We want to know. Write to us in the Comments Section or on 51VOA.COM.

soccer – n. the American name for a game known in many other countries as football

signed – adj. being in the writer's own handwriting