Update Required To play the media you will need to either update your browser to a recent version or update your Flash plugin.
By VOA
19 December 2022


At the end of every World Cup, the president of the international soccer governing body FIFA always says it was the "best World Cup ever."

The FIFA World Cup Qatar 2022 is now seen as one of the best ever with notable performances from Argentina's Lionel Messi and France's Kylian Mbappé. 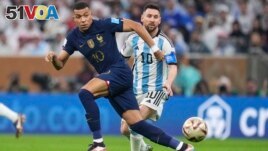 It did not start that way.

The South American national team lost to Saudi Arabia in its opening game by a score of 2-1. It was one of the biggest surprises in World Cup history. Messi, seen as one of the world's best soccer players called it a "hard blow." He said, "We did not expect to start in this way."

Argentina recovered from the loss to win its next five games. And Messi went on to score five goals to reach the final, the championship game.

With enough points to continue to the next round, France experimented with a different lineup against Tunisia in the final group stage game. The World Cup defending champion did not start their star player Kylian Mbappé. France lost the game 1-0.

France followed the loss with three straight wins over Poland, England and Morocco to reach the final. And Mbappé also tied Messi with five goals going into the game.

On Sunday, France and Mbappé took the field hoping to become the first team to win the World Cup back-to-back since Brazil's team did it with Pele in 1958 and 1962.

Messi, who has won every honor as a player, was looking for his first World Cup championship. He quickly put Argentina ahead with a penalty kick and teammate Angel Di Maria added a second goal before halftime.

Argentina continued to control the ball in the second half and kept it away from Mbappé. With about 10 minutes left to play, Mbappé shocked Argentina by scoring two goals within two minutes to tie the game.

With the score tied, the game went to extra time.

Messi scored his second goal in the second period of extra time to again put Argentina ahead. Not to be outdone, Mbappé scored his third goal on a penalty kick after his shot on goal hit the arm of an Argentine player. Geoff Hurst of England is the only other player who scored three goals in a FIFA World Cup final in 1966. In soccer and hockey, this is known as a "hat trick."

The score again tied at the end of the second extra period, so what is called a "shootout" would decide the winner. A shootout is when each team receives five penalty kick attempts.

In the shootout, Mbappé scored first. Messi quickly found the net to tie the score. France, however, missed the next two penalty kicks and the World Cup went to Argentina. As Messi hugged his crying mother to celebrate the victory, French President Emmanuel Macron went on the field to comfort Mbappé.

In Buenos Aires, hundreds of thousands of Argentines cheered on the streets as Argentina became world champions for the first time since 1986.

"It took so long, but here it is," Messi told reporters. "Obviously, I wanted to complete my career with this, (I) can't ask for more."

Mbappé, who turns 24 on Tuesday, received the Golden Boot as the top scorer of the tournament with 8 goals, one more than Messi.

Former England player Jamie Carragher wrote on Twitter, "This game showed why football is the greatest game of all. This one is an all-time classic."

Hai Do wrote this report for VOA Learning English with additional reporting from the Associated Press and Reuters.

round –n. one of a series of similar events

lineup –v. a list of players who will take part in a game

tie –v. to have an equal score

back-to-back –adj. one following the other

penalty kick –n. a chance to make a goal that is given after the opposing team has broken a major rule

outdo –v. to do better than someone else