Update Required To play the media you will need to either update your browser to a recent version or update your Flash plugin.
By Bryan Lynn
26 October 2022


Facebook parent company Meta has built a technology tool designed to directly translate spoken speech from one language to another.

Meta recently released a video that demonstrated how the artificial intelligence (AI)-powered tool can translate between English and the Hokkien language.

In the video, Meta chief Mark Zuckerberg explained that the project required different, unusual development methods. That is because Hokkien is mainly a spoken language. It does not have a widely used written form. 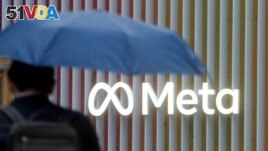 FILE - Logo of Meta Platforms is seen in Davos

Generally, developers of translation systems train AI models on very large amounts of written text in the target languages. This arms the system with many different language examples and combinations in an effort to produce the most correct results.

In general, AI-powered translation systems have improved greatly in recent years. It is now easier than ever to get translation help online or on devices to make international communication better.

But one problem with such systems is that there are delays linked to the translation process. For example, when the system records spoken speech, the words are first converted into text and then translated by an AI system. Then, the translated words are converted back into speech so they can be heard.

The unusual part of the Meta project is that the development team did not have large amounts of Hokkien language text to feed into the AI system.

Hokkien is a version, or dialect, of Chinese. It is spoken by millions of people in the southeastern Chinese province of Fujian. It is also spoken by many people in Taiwan and some communities in Malaysia, Singapore and the Philippines. The language is generally passed down through generations of families.

Meta notes that Hokkien is one of nearly 3,500 living languages that are mainly spoken and do not have a widely used writing system. The company says its AI developers are aiming to create speech-to-speech translation tools that would cover most of the world's languages.

Earlier this year, Meta announced two new AI projects. One is called No Language Left Behind. Zuckerberg said in a video that effort is designed to create translation systems to cover "hundreds" of world languages.

"The ability to communicate with anyone in any language — that's a superpower people have dreamed of forever, and AI is going to deliver that within our lifetimes," Zuckerberg said.

Meta said it used several different methods to create the new system to translate to and from Hokkien and English. The team trained its AI models on written text examples from another version of Chinese, Mandarin, which is similar to Hokkien.

In addition, Meta developers used an encoding tool designed to compare spoken Hokkien to similar English text. The team also worked closely with Hokkien speakers to make sure the results were correct.

Meta said it aims to use the same methods used for Hokkien to create speech-to-speech translation systems for many more languages in the future.

The company said, however, that its Hokkien translation model "is still a work in progress." It noted that the system is currently only able to translate one full sentence at a time.

Bryan Lynn wrote this story for VOA Learning English, based on reports from Facebook, Google and the South China Morning Post.

translate – v. to change words from one language into another

convert – adj. to change the appearance, form or purpose of something

encode – v. to represent complex information in a simple or short way