Methane May be Key in Search for Alien Life

Update Required To play the media you will need to either update your browser to a recent version or update your Flash plugin.
By John Russell
02 April 2022


Researchers recently said methane may be the first detectable sign of life outside of our planet. But the gas would only suggest the presence of life if discovered in the atmosphere of a rocky planet orbiting in the "habitable zone." This area is neither too hot nor too cold for liquid water to exist.

Scientists are working to understand the signs of life, known as biosignatures, that might be present in observations of planets in other solar systems.

The researchers, in a study published in Proceedings of the National Academy of Sciences, showed that atmospheric methane in the correct amount could be a sign of life if other conditions are met. 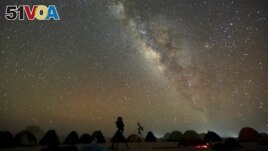 FILE - The Milky Way galaxy is seen in the night sky in the White Desert north of the Farafra Oasis southwest of Cairo May 16, 2015. (REUTERS/Amr Abdallah Dalsh/File)

Methane is an important trace gas in Earth's atmosphere, at less than 2 parts per million by volume.

Unlike other possible biosignatures such as atmospheric oxygen, methane is one of the few gases that could be detected by using the James Webb Space Telescope. The telescope was launched by NASA in December and is due to become operational within months.

Study lead author Maggie Thompson, a graduate student at the University of California, Santa Cruz, said "On Earth, the ... majority of methane is produced by life."

Most of the methane is created directly by life: methane-producing microbes in wetlands, rice fields or in the digestive system of large animals. Methane is also produced through human activities such as burning fossil fuels including coal and oil, which are the remains of dead organisms.

The researchers made a three-part case for methane as a possible biosignature.

"First, it would be unsurprising for life elsewhere to produce methane," study co-writer Joshua Krissansen-Totton said.

Secondly, methane would not last for long in atmospheres of habitable rocky planets without constant replenishment, possibly by living organisms, the researchers said.

Thirdly, they added, it would be difficult for other processes, such as chemical reactions, to maintain replenishment without leaving behind some kind of evidence. This evidence would suggest the methane was not biologically produced.

Oxygen, more plentiful in Earth's atmosphere than methane, is another possible biosignature. It is fed into Earth's atmosphere by biological processes - in this case photosynthesis by plants and microbes. But oxygen could be difficult for Webb to detect.

Krissansen-Totton explained that " it's important to note that the diversity of planetary environments elsewhere is probably" very large. He added, "There could be other... methane-making .... processes that no one has yet considered."

detect -- v. to discover or determine the existence, presence, or fact of

zone -- n. a region or area set off as distinct from surrounding or adjoining parts

graduate – adj. of, relating to, or engaged in studies beyond the first or bachelor's degree

microbe – n. an organism (such as a bacterium or protozoan) of microscopic or ultramicroscopic size

replenish – v. to fill or build up again

concentration -- n. the amount of a component in a given area or volume

photosynthesis – n. synthesis of chemical compounds with the aid of radiant energy and especially light