Update Required To play the media you will need to either update your browser to a recent version or update your Flash plugin.
By George Grow
20 September, 2017


The earthquake that struck near Mexico City Tuesday came exactly 32 years after an 8.0 magnitude quake hit the area.

Mexican officials say more than 200 people are confirmed dead following Tuesday's quake. Many buildings were damaged, while others were destroyed.

Rescue workers searched the capital and other areas on Wednesday in hopes of finding survivors.

Civilians joined the search and rescue teams shortly after the quake. They used heavy machinery and, in some cases their hands, to clear away wreckage from homes, schools and other buildings.

Scientists say the earthquake had a magnitude of 7.1. The United States Geological Survey defines magnitude as a number that represents the relative size of a quake.

The quake's epicenter was near the city of Puebla, 120 kilometers southeast of Mexico City. 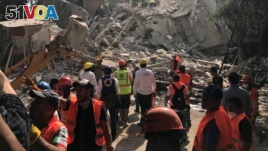 Ken Hudnut is a science adviser with the U.S. Geological Survey in Pasadena, California. He told VOA that the land on which the buildings were set up could be a reason for the collapses.

On Tuesday, U.S. President Donald Trump sent a message of support on Twitter. He wrote, "God bless the people of Mexico City. We are with you and will be there for you."

On Wednesday, Israel announced plans to send 70 people to Mexico to help with rescue efforts. A military spokesman said the team will help examine buildings to identify their damage and safety levels.

The earthquake hit less than two weeks after another quake killed more than 90 people in southern Mexico. The U.S. Geological Survey said the two quakes appeared to be unrelated.

The Earth's outermost surface is made up of large tectonic plates. As many as 20 tectonic plates cover the planet. They move slowly, sometimes sliding under one another. When that happens, earthquakes can take place.

"So both of them occurred within the plate that's going down underneath the plate that is overriding up on top. And both of them had some extensional movement, which is unusual. The more typical thing is like the 1985 earthquake that did much more damage in Mexico City than either of these..."

George Grow wrote this story for Learning English based on VOA, AP and Reuters news reports. Hai Do was the editor.

amplify – v. to expand; to make larger or greater

occur – v. to happen; to exist or appear

typical – adj. normal for someone or something