Update Required To play the media you will need to either update your browser to a recent version or update your Flash plugin.
By Pete Musto
26 November, 2018


Mexico has begun taking steps to increase security near its border with the United States.

The violence began when a group of migrants broke away from the protesters and attempted to cross the border. U.S. border agents reacted by firing tear gas into Mexico.

U.S. Homeland Security Secretary Kirstjen Nielsen said Customs and Border Patrol agents were struck by objects thrown by members of the group. The agency said that officers decided to use the tear gas "because of the risk to agents' safety."

Mexico's Interior Ministry said that officials were able to contain a group of about 500 people who "violently" tried to cross the border. The ministry said that those found to have taken part in the violence would be expelled immediately. 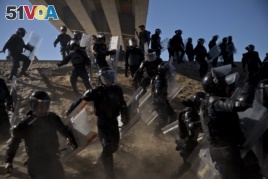 Mexican police run as they try to keep migrants from getting past the Chaparral border crossing in Tijuana, Mexico, Sunday, Nov. 25, 2018, near San Ysidro, California.

About 5,000 Central American migrants have been staying at a sports center in Tijuana for more than a week. Many are from El Salvador, Guatemala and Honduras. Most say they are trying to escape poverty and violence in their homelands.

After the violence, Lurbin Sarmiento of Honduras walked back to the sports center with her four-year-old daughter. Sarmiento said she had been near the bottom of the Tijuana River when U.S. agents fired tear gas.

She told the Associated Press, "We ran, but the smoke always reached us and my daughter was choking."

She said she never would have gotten that close with her daughter if she thought there would be tear gas.

The wind carried some of the gas toward hundreds of migrants after some tried to get through the wire and fencing separating the two countries. U.S. officials closed the border crossing at San Ysidro for several hours at the end of last week.

On Friday, Tijuana Mayor Juan Manuel Gastelum declared a humanitarian crisis in his city, which is home to 1.6 million people. He said that Tijuana is struggling to shelter the large number of migrants.

Irineo Mujica has traveled with the migrants for weeks as a representative of the aid group Pueblo Sin Fronteras. He said the aim of Sunday's march was to make the migrants' suffering more visible to U.S. and Mexican officials.

"We can't have all these people here," he said.

On Monday, U.S. President Donald Trump expressed his displeasure with the group of migrants who traveled through Mexico to the border. He also made new arguments for his promised border wall.

He wrote on Twitter, "Mexico should move the flag waving Migrants, many of whom are stone cold criminals, back to their countries. Do it by plane, do it by bus, do it anyway you want, but they are NOT coming into the U.S.A. We will close the Border permanently if need be. Congress, fund the WALL!"

Trump has repeatedly suggested without evidence that the group of migrants is filled with criminals. But The Associated Press reports that many are poor people with few belongings who have fled violence in their home countries. During his presidential election campaign, Trump promised he would have Mexico pay for the wall.

Mexico's Interior Ministry reported on Sunday that the country has sent 11,000 Central Americans back to their countries since October 19. That was when the first of the two recent large migrant groups entered the country.

Mexico will likely send a total of around 100,000 Central Americans back home by the end of this year.

We want to hear from you. How should Mexico and the United States deal with the migrant issue? Write to us in the Comments Section or on 51VOA.COM.

choking – v. becoming unable to breathe usually because something gets stuck in your throat or because the air is not good for breathing

visible – adj. known to or noticed by the public

fund – v. to provide money for something