Mexico Launches Effort in US to Help Migrants

Update Required To play the media you will need to either update your browser to a recent version or update your Flash plugin.
By Alice Bryant
10 March, 2017


The Mexican government says it is spending $50 million to increase legal aid to migrants who fear the U.S. will send them back to Mexico. The new effort is a response to President Donald Trump's policies on illegal immigration, the Associated Press reported.

Last week, all 50 Mexican consulates in the U.S. launched legal assistance centers to form partnerships with nonprofit groups. The consulates will also find lawyers to help those who fear the president's policies.

The effort comes as the U.S. and Mexico continue their disagreement over Trump's plans for a border wall. Trump wants Mexico to pay for the wall. Mexico says it will not.

In February, the Trump Administration also released new rules for aggressively detaining and deporting immigrants. These policies include increasing the number of federal enforcement officers and strengthening cooperation with local law enforcement agencies. 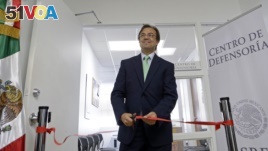 Mexican Consul General Jose Antonio Zabalgoitia cuts a ribbon at the opening of a legal defense center in Miami.

Jose Antonio Zabalgoitia is Miami's Mexican consul general. Last week, he said that these centers would provide real support for the rights of Mexican migrants.

He also said that the consulates will put legal matters first. He said the consulates did not need to seek so much legal support for Mexican people in the past. "But now, we need to protect them against an eventual deportation," he said.

Mexican consulates are forming partnerships with law schools, immigration clinics and nonprofit groups that take legal action for immigrants. Mexican lawyers who can send legal cases to organizations or clinics work at the centers. The centers are also talking to private law offices interested in donating legal services.

Worried about their children

Consulates of Mexico and other Central American nations have received numerous requests from migrants. Migrants are concerned about many issues including what will happen to their children who were born in the U.S.

Zabalgoitia said there has been a sharp increase in requests for official documents and for assistance. He noted that many people are in need of birth records, Mexican passports and other documents. Zabalgoitia said he used to sign two birth records each week. Recently he signed 15 in one day.

The increasing demand comes from people like Gloria Portillo. She went to the Mexican consulate in Phoenix, Arizona last week to renew her passport. Her visa is no longer current. She is now starting the process of becoming a legal resident. Although she is married to a U.S. citizen, she fears something may stop her from legally staying in the country.

Speaking about her friends and family living in the U.S. illegally, she said, "We've been here all of our lives, we have kids, and of course we're afraid to be deported."

Near Boston, Mexican diplomats have been meeting with families at churches and community events to explain complex issues. For example, they explain that, without citizenship in both countries, it is difficult to claim U.S.-born children after deportation. 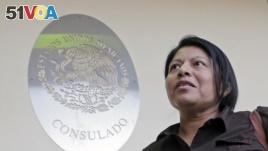 Illegal immigrant Divina Ciriaco, of Mexico, talks to a reporter, at the Mexican Consulate, March 3, 2017, in Miami.

'Fear of going back to Mexico'

Oscar Solis is a first secretary of the Mexican consulate in Houston. He said that feelings toward migrants have become less open and friendly. "It's like in wars. They come for one person and many who are innocent — or not really involved — end up paying."

Divina Ciriaco is a 45-year-old woman who cleans houses. She lives in the Miami area. She is gathering all the Mexican documents she would need for her U.S.-born boy to go with her if she is deported.

"We live in fear of going back to Mexico, to the violence, the poverty we suffered," said Ciriaco.

She migrated with her husband and two children 20 years ago from the Mexican state of Guerrero. She gave birth to her third child in Miami.

"Now, it's just a matter of waiting for that day to come," she said.

migrant - n. a person who moves from one place to another, especially to find work

consulate - n. the building where a consul works and sometimes lives

consul - n. a government official whose job is to live in a foreign country and protect and help the citizens of his or her own country who are traveling, living, or doing business there

immigration clinic - n. a center at a university where law students legally represent immigration clients from all over the world; often the clients are low-income and undocumented

resident - n. someone who is permitted to live in a country