Mexico’s President Will Not Attend Meeting of the Americas

Update Required To play the media you will need to either update your browser to a recent version or update your Flash plugin.
By Dan Friedell
07 June 2022


Mexico says the United States discriminated against Cuba, Venezuela and Nicaragua by excluding them from an upcoming leaders' gathering.

Mexican President Andres Manuel Lopez Obrador said Monday he would not attend the Summit of the Americas in Los Angeles, California.

Lopez Obrador noted that the U.S. had not invited all of the area's leaders. He said, "...There can't be Summit of the Americas if not all countries ... are taking part." 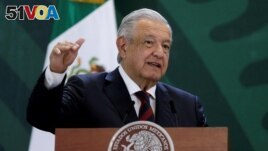 The decision to cut Cuba, Venezuela and Nicaragua from the meeting was due to concerns about human rights and a lack of democracy in the three nations, a top U.S. official said.

Mexico is sending Foreign Minister Marcelo Ebrard to the gathering. On Tuesday, he sharply criticized the United States.

Ebrard's opinion piece appeared in the Mexican newspaper Excelsior. He wrote that the U.S. does not treat countries equally in connection to their human rights situations.

"The so-called democratic clause," Ebrard wrote, is used when it is "convenient" to the U.S. He pointed to the country's membership in the Association of Southeast Asian Nations, or ASEAN, as an example. Among ASEAN's members are military-ruled Myanmar, and Vietnam, under single-party rule.

U.S. officials said the meeting is for nations that have strong democratic and human rights records.

The summit is taking place in the U.S. for the first time since the first such gathering in Miami, Florida in 1994. The U.S. wants to regain its place as a regional leader. It is expected to share concerns and ideas at the meeting about China's growing influence. President Joe Biden will likely seek support for efforts aimed at blocking that growing power.

A U.S. official said the decision to ban Cuba, Nicaragua and Venezuela only came after weeks of thought.

Ned Price is a spokesperson for the U.S. State Department.

He said the U.S. "understands" Mexico's concerns, but those three nations are not a strong example of democratic leadership.

Without Lopez Obrador, some observers wonder how productive the meeting will be. One of the main subjects of the talks is how to slow migration into the U.S. from the border with Mexico.

A U.S. official, however, said the Mexican president's absence would not hurt the talks. There will be 23 leaders present, which is close to the number at past summits.

One U.S. lawmaker, Senator Robert Menendez of New Jersey, said, Lopez Obrador's absence would hurt the relationship between Mexico and the United States.

One leader who will attend is Brazilian President Jair Bolsonaro. He had seemed unsure whether to accept the invitation at first.

The ban of Nicaragua and Venezuela has been talked about recently, with Cuba's president, Miguel Diaz-Canel, saying he would not go even if invited.

Cuba called the decision to ban the three countries "discriminatory and unacceptable." Both Venezuelan leader Nicolas Maduro and Nicaraguan leader Daniel Ortega were not invited.

The U.S. instead invited opposition leaders and activists to attend.

The Biden administration said it expects representatives for Venezuelan opposition leader Juan Guaidó to attend either in person or over a video connection.

While most leaders from nations in the Americas will be in Los Angeles, the pushback has observers wondering if the U.S. will continue to be influential in Central and South America.

Some of the other discussion subjects expected include a pandemic recovery partnership, reform of the Inter-American Development Bank and a $300 million plan for regional food security.

clause – n. an exception or separate part of a legal document

convenient– adj. allowing you to do something easily and without trouble