Update Required To play the media you will need to either update your browser to a recent version or update your Flash plugin.
By Mehrnoush Karimian-Ainsworth
21 June, 2016


Police arrested a British man in Las Vegas last Saturday for what they say was an attempt to kill Republican presidential candidate Donald Trump.

Michael Steven Sandford attended a Trump campaign event in Las Vegas. The complaint says he tried to take a gun from a police officer who was providing security.

The Secret Service wrote in the court document, "Sandford claimed he had been planning to attempt to kill Trump for about a year." The document, however, does not provide any motive. 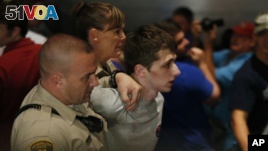 Police remove Michael Steven Sandford after he attempted to attack Republican presidential candidate Donald Trump as he spoke at the Treasure Island Hotel and Casino in Las Vegas, June 18, 2016.

Sandford told officials that the first time he fired a gun was last Friday when he went to a Las Vegas gun range to learn how to shoot.

He went on to say that if he were released from custody, he would try again to kill Trump. Sandford told officials that if he had not acted in Las Vegas, he would have acted at a Trump campaign event in Arizona.

The complaint says Sandford "was convinced he would be killed by law enforcement during his attempt on Trump's life."

He is scheduled to appear in court on July 5.

Chris Hannas reported on this story for VOANews. Mehrnoush Karimian-Ainsworth adapted it for Learning English. Hai Do was the editor.

complaint – n. a formal charge saying that someone has done something wrong : the act of saying or writing that you are unhappy or dissatisfied with something

motive – adj. a reason for doing something