Update Required To play the media you will need to either update your browser to a recent version or update your Flash plugin.
By Susan Shand
01 December, 2018


Dominique Crenn has become the first woman in the United States to receive Michelin Guide's highest honor of three stars.

The French-born chef was recognized Thursday when Michelin published its yearly rating of top restaurants in the San Francisco area.

Her restaurant, Atelier Crenn, has been praised for its creative and artistic offerings since it opened in 2011. 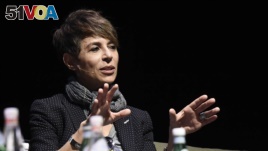 FILE - Chef Dominique Crenn at the Los Angeles Times Food Bowl Food for Soul at the Ace Hotel Downtown on Friday, May 5, 2017, in Los Angeles.

A year ago, Michelin gave Atelier Crenn a two-star rating. Its rise to three stars was unanimous among the travel guide's food critics. They praised the restaurant for its "top-quality experience," noted Gwendal Poullennec, Michelin Guide's international director.

Crenn is a small eatery with only eight tables. It offers a tasting menu for $335.

Dominque Crenn is the fifth female chef in the world to head a Michelin three-star restaurant. The other chefs are Carme Ruscalleda in Spain, Anne-Sophie Pic in France, Nadia Santini in Italy and Clare Smyth in Britain.

Atelier Crenn and Single Thread are the only three-star restaurants in the San Francisco Bay area. They join six other businesses on the guidebook's list of top Bay-area restaurants for 2019. Their food is "worth a special journey," Michelin said.

The latest San Francisco guidebook will go on sale on December 4.

For the second time in two years, San Francisco and the nearby wine-producing areas of Napa and Sonoma have more three-star restaurants than New York City, which has five.

New York still has a lot of top restaurants, said Poullennec. She added there are more restaurants there with one, two or three Michelin stars than in San Francisco.

The identity of Michelin's food critics is always kept secret. A restaurant must be visited by several critics before it is recognized with any stars.

The Michelin Guide began in France in the early 20th century for drivers who needed places to stop.

The Reuters news agency reported this story. Susan Shand adapted it for VOA Learning English. George Grow was the editor.

chef – n. one who cooks professionally

menu – n. a list of foods that may be ordered