Update Required To play the media you will need to either update your browser to a recent version or update your Flash plugin.
By John Russell
15 June 2022


Microsoft will no longer support Internet Explorer, the internet browser that many people loved to hate.

The big technology company based in Redmond, Washington, said Internet Explorer, or IE, will end on June 15.

The 27-year-old browser now joins other kinds of technology products that are no longer used: BlackBerry phones, Palm Pilots and dial-up modems. 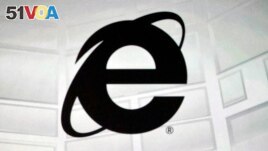 IE's end was not a surprise. Microsoft announced the move last year. The technology company has been pushing users to its Edge browser, which was launched in 2015.

The company made clear then it was time to move on.

Users marked Explorer's passing on Twitter. Some criticized the browser; while others posted 1990′s nostalgia memes – images that bring back fun or happy memories.

Microsoft went on to tie IE and its Windows operating system tightly together.

But Microsoft faced legal battles in the U.S. in the late 1990's and early 2000's over its efforts to keep out competing browsers.

The company also had problems with European officials who said that tying Internet Explorer to Windows gave it an unfair advantage over other browsers. Other browsers included Mozilla's Firefox, Opera and Google's Chrome.

Users complained that IE was slow, likely to crash and easily hacked. IE's market share, which in the early 2000s was over 90 percent, began to decrease as users found other browsers.

The internet research company Statcounter said the Chrome browser controls roughly 65 percent of the worldwide browser market today. It is followed by Apple's Safari with 19 percent. Microsoft Edge has about four percent, just ahead of Firefox.

Richard Jacobsen reported on this story for the Associated Press. John Russell adapted it for VOA Learning English.

browser – n. a computer program that is used to find and look at information on the Internet

dial-up modem –n. an internet connection through a telephone line

hack – v. (computers) to secretly get access to the files on a computer or network in order to get information, cause damage, etc.