Update Required To play the media you will need to either update your browser to a recent version or update your Flash plugin.
By Phil Dierking
22 January, 2017


Computer coding was once an activity for computer programmers and software engineers.

Now, thanks to Microsoft Corporation, anyone around the world has the chance to learn coding skills.

Microsoft has partnered with Code.org, a non-profit group, to offer free in-store classes and online training on coding. The programs are being offered in the United States and overseas.

Every online website and mobile application program is coded with a programming "language," such as Java or C++. The step-by-step directions for each language are not hard to understand. They can be taught to someone as young as 4 years old. 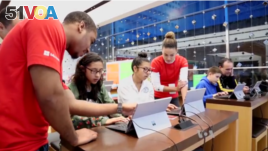 "Coding is a universal language," she notes. "Coding is the language of solving problems. It's very rare that a new literacy comes along in our lifetime. It absolutely can be democratized."

On a recent day, a handful of students attended a class at a Microsoft store in New York City. They studied the "Minecraft" video game to learn about coding. They learned to put together virtual blocks of code for simple commands like "move forward" and "turn left." These commands direct the movement of the images in the game.

Microsoft is also expanding coding programs overseas. The company has given computer hardware to 25 entrepreneurs in Lagos, Nigeria to help get their business startup ideas up and running. It also provided technical and business training to them.

"Many of our entrepreneurs are not technical, Sarkar said. "But that does not mean they don't know what problems exist in Nigeria and they don't have a solution to fix it."

One of the Nigerian startup businesses is called OneTrack. It is creating mobile-tracking technology to fight against child kidnapping.

Building and learning for different environments.

"We were coding one night," Sarkar remembered. "We were working on prototypes. The lights go out. No one notices. They (the coders) just keep typing. To them it's a way of life."

The incident served as an example of the day-to-day problems that can affect some Microsoft users. It provided information for Microsoft officials on the ways in which they can improve their products.

Tina Trinh reported this story for VOANews. Phil Dierking adapted her report for Learning English. George Grow was the editor.

How do you think learning computer programming can help people around the world? We want to hear from you. Write to us in the Comments Section or on 51voa.com.

application – n. an application, especially as downloaded by a user to a mobile device.

entrepreneur – n. a person who starts a business

feedback – n. helpful information or criticism that is given to someone

hardware – n. collection of physical parts of a computer system

online – adj. connected to a computer, a computer network, or the Internet

prototype – n. an original or first model of something from which other forms are copied or developed