Update Required To play the media you will need to either update your browser to a recent version or update your Flash plugin.
By Christopher Jones-Cruise
16 April, 2016


Computer technology company Microsoft has brought a legal case against the U.S. government.

Microsoft says a law that permits agencies to demand to read emails or online files without their owners' knowledge violates the Constitution.

The Reuters news agency reports that the company believes the government's actions violate the Fourth Amendment to the Constitution. That amendment bans "unreasonable searches and seizures." 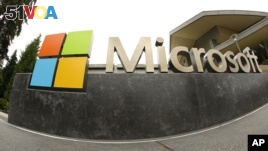 The Microsoft Corp. logo appears outside the Microsoft Visitor Center in Redmond, Washington, July 3, 2014. In a lawsuit filed April 14, 2016, Microsoft is suing the US government over a federal law that lets authorities examine customers' emails or online files without the customers' knowledge. The lawsuit comes as the tech industry is increasingly butting heads with U.S. officials over customers' privacy rights. (AP Photo Ted S. Warren, File)

The law in question is the Electronics Communications Privacy Act of 1986. It permits government investigators to examine emails and other electronic files without telling the owners of the documents. In most cases, a judge must give the investigators permission to do so.

Microsoft says the law was written before distant computer data storage centers, known as the cloud, were developed.

Microsoft is a major operator of cloud storage for computers. It says the government is using the new technology to increase its power.

The Justice Department says it is studying the lawsuit. Daniel Rosenthal is a former U.S. attorney. He told the Associated Press news agency that forcing the government to tell the owners of files that they are being examined could hurt law enforcement efforts. He says doing so would let "child molesters, domestic abusers, violent criminals and terrorists" know that their emails and files are being read.

Microsoft Vice President and General Counsel Brad Smith said he understands that there are times when it is important not to tell people their files are being read. But he said "people should not lose their right(s) just because they are storing their information in the cloud."

Microsoft says it received more than 5,600 federal demands for access to files between September 2014 and March 2015. It says more than half of the requests did not permit the company to tell the owners of the files that their information was being read.

seizure – n. the act of taking something by legal authority