Update Required To play the media you will need to either update your browser to a recent version or update your Flash plugin.
By Christopher Jones-Cruise
24 April, 2015

The European Union announced its intention to increase funding for search and rescue efforts at sea after an emergency meeting in Brussels, Belgium. Also, French President Francois Holland said he will seek a resolution at the United Nations. He said the resolution would authorize the E.U. to destroy boats used by smugglers to take thousands of migrants from North Africa to Europe. 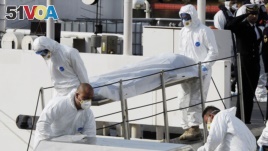 The E.U. officials were reacting to the sinking of a boat carrying migrants off the coast of Libya on April 19 drowning hundreds of people.

The United Nations refugee agency praised E.U. plans to increase funding for rescue efforts in the Mediterranean Sea. The U.N. High Commission for Refugees said that the decision to increase rescue operations is an important first step "toward collective European action." But, it said the main issue for refugee safety is access to asylum when fleeing violence from their countries.

European investigators are still trying to discover why a ship carrying migrants sunk off the Libyan coast on Sunday. Officials believe at least 800 migrants died when the wooden fishing boat sank. On the island of Malta on Thursday, the bodies of 24 people who died in the sinking were buried. They are the only bodies that have been found. The boat sank with the other migrants trapped inside. About 28 people survived the sinking. Most of them are from sub-Saharan Africa, Bangladesh and Tunisia.

Italian police arrested the ship's 27-year-old captain, who is from Tunisia. They say he mistakenly crashed his boat into a Portuguese ship that was trying to aid his ship. The captain was in court on Friday in the Italian city of Catania to hear the charges government lawyers plan to bring against him. 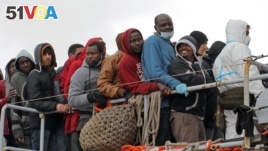 Migrants waits to leave a tugboat after being rescued in Porto Empedocle, Sicily earlier this year.

Thousands of migrants from North Africa, the Middle East and South Asia have already entered European countries this year after fleeing conflict and hardship. The International Organization for Migration says 1,727 migrants have died so far this year. More than 200,000 migrants made the dangerous trip across the Mediterranean Sea in 2014. Officials say more than 3,200 died as they tried to escape poverty, war and repression.

The number of migrant deaths has risen sharply in the past twelve months. Experts predict it will continue to increase unless actions are taken to stop the migrants from leaving their countries. The International Organization for Migration predicts the number of dead could reach 30,000 by the end of this year.

Dimitris Avramopoulos is the top EU migration official. Earlier this week, he said, "We will take action now. Europe is declaring war on smugglers."

On Thursday, German Chancellor Angela Merkel said action must be taken to stop smugglers from turning the Mediterranean Sea into a graveyard.

She said, "we must and will do everything to fight against traffickers who expose people to danger and death. We must also focus on why people are fleeing their homes. And we must do everything possible to keep people from continuing to die in the Mediterranean Sea, on our doorstep, in the most agonizing manner.

European Council President Donald Tusk said saving the lives of innocent people is, in his words, "the number one priority for us."

"But saving lives is not only about rescuing people at sea, it is also about fighting smugglers and preventing illegal migration flows. First we need to crack down on the human smugglers. We have to break up their networks and to undermine their business model," he said.

Last year, the EU ended a search and rescue program because of its cost. Officials also worried that it was encouraging more migrants to try to cross the Mediterranean. Some EU leaders have said the best way to keep migrants from drowning is to keep migrant boats from leaving Africa in the first place.

And that's In the News, from VOA Learning English.

This story was reported by Marissa Melton, Zlatica Hoke and Ken Bredemeier in Washington and Lisa Schlein in Geneva. Christopher Jones-Cruise wrote it for VOA Learning English. Hai Do was the editor.

on our doorstep – phrase to be very close to reaching something

undermine – v. to make something weaker or less effective in a secret or slow way

business model – n. the plan by which a business operates