Update Required To play the media you will need to either update your browser to a recent version or update your Flash plugin.
By VOA
29 April, 2015


Immigrants continue arriving in southern Italy from North Africa. These migrants faced a dangerous trip when they sailed across the Mediterranean Sea. They reach land only to face an unknown future in Europe.

On the island of Sicily, there is an activist ready to help the refugees on their journey. She lives in the city of Catania. The woman is known to some as "the angel of the migrants."

Among the crowd of Syrian refugees in Catania station, it is the number of children that is striking. There are babies just a few weeks old. These Syrians have fled civil war. And they have spent up to 20 days at sea in an old fishing boat.

The refugees are tired. They have little money and few belongings. What they do bring with them are stories of terror and loss. The refugees who survived the boat ride to Italy now start the next part of their trip – a night train ride to the city of Milan. A rescuer holds a child in the Sicilian harbor of Pozzallo, Italy on April 20, 2015. (AP Photo/Alessandra Tarantino)

In Catania, a man describes what forced him to flee his home in Rif Al Sham, a community near Damascus. His name is Ahmad Anwar Fares.

He says they bombed his house, killing his 4-month-old daughter when part of the building fell on her. Mr. Fares says he has two sons. After the bombing of his home, he says, he immediately got his boys and left.

For the migrants arriving in Catania, there is at least one friendly face waiting for them.

Nawal Soufi is a Moroccan-Italian woman. She is known as the "Angel of the Migrants." Ms. Soufi and her friends offer baby food and clothes to the new arrivals, along with words of advice.

She says to them, "I love you all. You are my family. God bless you and may you achieve your dreams."

On this day, she says, a group of con men offered to drive them to the north for 500 euros each. She explains to the migrants that they have the right to take a train and that the police cannot stop them.

After leaving North Africa, migrants often call Ms. Soufi from a satellite phone so she can then alert the coast guard. This has earned her the nickname "Lady SOS." SOS is the international Morse code signal for help. 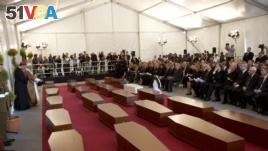 A funeral service for 24 migrants who drowned while trying to reach the Southern coasts of Italy. The funeral was held in Valletta, Malta on April 23, 2015. (AP PHOTO)

But not all those fleeing Syria are lucky enough to reach Italian waters. Earlier this month, up to 900 migrants died when their boat sank off Libya. Ms. Soufi says she is angry at Europe's inaction.

And she asks some hard questions: "How is it possible that Europe cannot guarantee a humanitarian passage from Syria? And why cannot each European country take a share of these migrants? "

"Europe is considered a group of democratic countries," she adds, "where everyone knows about human rights. Perhaps they only know about democracy on paper. Nine hundred is not just a number," she says. "It is 900 people."

The migrants at Catania have survived that deadly trip. Now they face new fears.

Nawal Soufi goes to the train station to say ‘good bye' to the migrants when they leave for Milan.

She urges them to be strong. She will return the next day, ready to help another wave of migrants arriving on this corner of Europe's southern shores.

Henry Ridgwell reported this story for VOA News from Catania, Italy. Anna Matteo adapted it for Learning English. George Grow was the editor.

striking – adj. unusual or extreme in a way that attracts attention

con man – n. informal a man who cheats or tricks someone by means of a confidence game

satellite phone – n. a type of mobile phone that connects to orbiting satellites instead of cell sites on earth