Migration Out of the Middle East Shows No Signs of Slowing

Update Required To play the media you will need to either update your browser to a recent version or update your Flash plugin.
By Patrick Merentie
06 October, 2016


Recent conflicts in the Middle East are responsible for the worst global refugee crisis in 70 years.

Data from the United Nations showed that more than 1 million migrants escaped to Europe last year. Syrians refugees made up 28% of that number. Refugees from Iraq and Afghanistan were the next largest groups.

William Lacy Swing is the director general of the International Organization of Migration, based in Geneva, Switzerland. 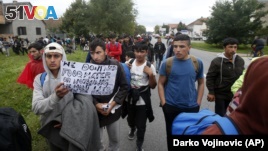 Hundreds of migrants stuck in Serbia set off on foot toward the border with Hungary to protest its closure for most people trying to reach the European Union.

He says that if conflicts in the Middle East and South Asia continue, the flow of refugees into Europe will likely continue as well.

The top priority, he said, "is to get the biggest problem solved, which is Syria."

Half the population of Syria has fled the country since the civil war started in 2011.

Currently six million Syrians live outside of Syria. One million have escaped to Europe. The majority live in temporary shelters in Jordan, Turkey and Lebanon.

International migration officials hoped the September 12 ceasefire created by the U.S. and Russia would lead to peace and to Syrians returning to their country. But the ceasefire ended suddenly when U.S. airplanes struck Syrian troops, and the Syrian government bombed a U.N. convoy.

William Lacy Swing of the IOM observes that collapse of the ceasefire shows that the causes for migration in Syria have not changed.

Mediterranean migration is down, but deaths are up

The International Organization for Migration released new data last month about migration through the Mediterranean Sea.

The numbers showed that migration to Europe using the Mediterranean Sea has gone down 40% so far this year.

About 300,000 migrants and refugees crossed the Mediterranean into Europe between January 1 and September 25. During the same period last year, about 500,000 entered.

But over the same time, the number of deaths rose 20%.

IOM data showed that 3,501 migrants and refugees died from January 1 through September 25th. That number includes the more than 200 people whose overcrowded boat sank off the coast of Egypt at the end of September. The victims were trying to enter Europe illegally.

The director general of the IOM, William Lacy Swing, told VOA, "This is a tragedy." He said government policies accidentally make the migration situation worse.

Because countries do not offer enough ways for people to get out of dangerous situations safely, refugees are forced to use smugglers and travel in overcrowded boats, such as the one that recently sank.

More than 50 countries and organizations met in September at the UN General Assembly in New York to discuss the refugee problem. They all agreed to double the number of refugees they take in through the UN program.

Together, the countries will take a total of 360,000 refugees next year. But the UN says far more refugees will need to be resettled in 2017. It predicts that at least 1.2 million people will need to find new homes.

IOM director William Lacy Swing is confident all the nations will honor their agreements. But, he said, "I do think it is pretty bad ... that we cannot reach a quota of 1 million."

President Barack Obama told the UN General Assembly that the migrant crisis was "a test of our international system where all nations ought to share in our collective responsibilities, because the vast majority of refugees are hosted by just 10 countries."

To persuade other countries to take in refugees, the Obama administration announced a new funding system. The system allows wealthier nations to give money to less developed nations.

The fund will be managed by the IOM and the UN's refugee agency. The U.S. has already contributed $11 million to the fund.

"I think that if you look at the hundreds of thousands of cases that have come in here, up to now they have found virtually none," he said. "More likely is what happened in Europe: If they get here and they're not properly integrated, then they can become a problem."

Masood Farivar reported on this story for VOANews. Patrick Merentie adapted the report for Learning English. Kelly Jean Kelly was the editor.

We want to hear from you. How should the international community help these refugees? How has your country responded to this crisis? Write to us in the Comments Section or on 51VOA.COM.

migrant - n. someone who moves from place to place, usually for economic reasons

migration – n. movement of people from one country or place to live or work in another

smuggler(s) – n. a person who moves people or things from one country into another illegally and secretly

collective – adj. shared or done by a group of people

host(ed) – v. to be cared for or provided with the things one might need

funding – n. the way to provide money for something

unfounded – adj. not based on facts or proof

integrated – adj. allowing all types of people to participate or be included