Update Required To play the media you will need to either update your browser to a recent version or update your Flash plugin.
By Bryan Lynn
14 October, 2016


Former Soviet leader Mikhail Gorbachev warned this week that tensions between Russia and the United States have reached a "dangerous point."

His comments followed a series of issues that have strained relations between Washington and Moscow. Among them are the war in Syria and U.S. accusations that Russia is involved in cyber attacks aimed at disrupting U.S. elections next month.

"I think the world has reached a dangerous point," Gorbachev told RIA Novosti, Russia's state news agency. The former leader said he did not have any specific advice for either country.

"But I do want to say that this needs to stop," he said. "We need to renew dialogue. Stopping it was the biggest mistake." Gorbachev, 85, is credited with easing years of tensions between the Soviet Union and the West. He led the country from 1985 to 1991. He signed several important nuclear disarmament deals with the United States during his rule. In 1990, he received the Nobel Peace Prize for his efforts.

On October 3, the United States said it was giving up its efforts with Russia to negotiate a cease-fire in Syria. U.S. officials noted continued military attacks against civilian targets in the nation.

Russia answered the American actions by suspending a number of nuclear cooperation agreements with the United States. It also moved to build up its military forces in Syria and along the Russian border with Europe.

Recently, Russia deployed Iskander missiles to a base in Kaliningrad, which sits on the Baltic coast between Poland and Lithuania. Those missiles are able to travel about 500 kilometers in the air and carry nuclear weapons.

German Foreign Minister Frank-Walter Steinmeier wrote in the Bild newspaper about the deployment. He said he thought it created a more dangerous situation than during the Cold War when the Soviet Union competed against the West.

"The dramatic reaction of the West about Iskander [missiles] now is that it is just a wake-up call, it is just a very clear message. It is that ice-cold bucket of water that (says), ‘Wake up, you are not living in a safe world.'"

During the Cold War, the Soviet Union deployed large missiles in what was then East Germany and Czechoslovakia. Sutyagin says this time around, the missile deployment is more psychological.

"The idea is to intimidate the West. Because Russia does not have any other tools to fight for its competitiveness in the international arena but psychology. Even the Russian military are comparatively weaker than NATO's forces."

Other issues have also increased tensions between Russia and the United States.

Last week, U.S. officials accused the Russian government of being involved in attacks on American computer systems. They suspect those cyber attacks are meant to disrupt the U.S. elections next month. 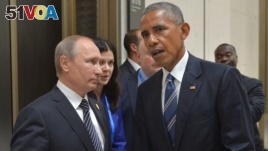 The cyber activity resulted in thousands of emails being leaked from the Democratic National Committee last July. In the past, U.S. officials had said they suspected Russian involvement in the leak. But in a statement last week, the Office of the Director of National Intelligence and the Department of Homeland Security went farther, to actually name Russia.

"We believe, based on the scope and sensitivity of these efforts, that only Russia's senior-most officials could have authorized these activities," the statement said.

In reaction, Deputy Foreign Minister Sergei Ryabkov said U.S. officials were creating what he called "anti-Russian hysteria." He accused the U.S. administration of using "dirty methods" to blame Russian cyber attackers ahead of the U.S. elections.

Bryan Lynn wrote this story for VOA Learning English. His story was based on reports from reporter Henry Ridgwell, RadioFree Europe/RadioLiberty, the Associated Press and Agence France-Presse. George Grow was the editor.

We want to hear from you. What do you think about the state of U.S.-Russia relations? Write to us in the Comments section, and visit 51VOA.COM.

disrupt – v. make something not be able to normally continue

renew – v. to restart or continue

wake-up call – n. something that happens to cause a person to take action

bucket – n. a round, open container used to carry liquids

sensitivity – n. an awareness and understanding of other people