More Than 60 Killed in Attack on Pakistan Police Training Center

Update Required To play the media you will need to either update your browser to a recent version or update your Flash plugin.
By Christopher Jones-Cruise
25 October, 2016


Pakistan is investigating a suicide attack on a police training center in the country's southwest.

The attackers killed over 60 new police recruits and wounded more than 120 others.

The attack happened near the city of Quetta, the capital of Baluchistan province. It began late Monday night. Three attackers entered the housing for recruits and began shooting at them. 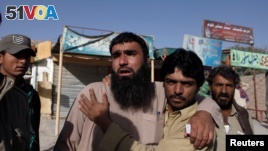 Relatives of police cadets wait for word outside the Police Training Center after an attack on the center in Quetta, Pakistan Oct. 25, 2016.

On Tuesday, the Islamic State group released photographs through its Amaq news agency. The pictures showed what it said were the three attackers. They were carrying machine guns and had explosives on their bodies.

Witnesses said the attackers seized hostages before Pakistani troops and other forces entered the building to fight the gunmen.

The fighting lasted several hours. Two of the attackers died when they set off their explosives. The third was shot in an exchange of gunfire with security forces.

The attack ended just before sunrise on Tuesday.

A provincial government spokesman told VOA the victims were all unarmed and were either sleeping or on their smartphones.

Some of the recruits and others inside the building escaped by jumping out windows. They told reporters the gunmen were wearing masks and began shooting as soon as they entered the building.

The Islamic State has claimed responsibility for the attack. But a Pakistani military commander said telephone calls suggest the gunmen belonged to the Sunni militant group Lashkar-e-Jhangvi. General Sher Afgun said that Pakistani intelligence had listened to the calls. He said the attackers were getting orders from people in Afghanistan.

Moeen Cheema is an expert on Pakistan. He teaches at the Australian National University. He told VOA that the militant group, which has ties to the Pakistani Taliban, has not carried out attacks in Baluchistan before.

"Clearly there is motivation for Lashkar-e-Jhangvi -- if it is confirmed it is the Lashkar-e-Jhangvi that has carried out this attack -- there's clearly motivation because they have been targeting public officials, and now the military as well, in retaliation for the intelligence-based operations against them."

Cheema says the Pakistani military has been fighting militants with some success, but he believes the battles will continue.

"Over the last couple of years the Pakistan military launched a, a massive operation in which it has claimed tremendous success in the federally administered tribal areas further north. The military is definitely claiming success in the continuing fight, but given the complexity and the nuances in the kind of militancy that Pakistan has experienced, the chances are that this is a tough fight to be fought over many, many more years to come."

A fight that will most likely mean more lives will be lost.

Ayaz Gul in Islamabad reported this story for VOANews. Christopher Jones-Cruise adapted his report for Learning English. He also used reporting from VOA's Victor Beattie in Washington. George Grow was the editor.

recruit – n. a person who has recently joined a company, organization, etc.

smartphone – n. a mobile telephone that can be used to send and receive e-mail, connect to the Internet, take photographs, etc.

mask – n. a covering for your face or part of your face