Update Required To play the media you will need to either update your browser to a recent version or update your Flash plugin.
By VOA
17 September, 2016

We also shared the stories of two students, Giorgia and Jason.

Giorgia began attending classes at McGill University in Montreal, Canada in 2010. But the pressure of succeeding and worrying about what she would do after college led to her misusing a medication called Adderall. 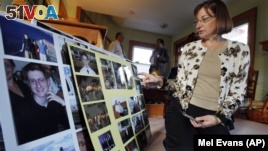 Jane Clementi, the mother of a Rutgers University student who killed himself, looks at family photographs.

Giorgia cut back on eating and sleeping, and began to suspect friends and strangers of spying on her.

Eventually, a doctor found that Giorgia was suffering from bipolar disorder, a condition that causes unusual changes in emotions and energy levels.

Jason began considering suicide after his parents ended their marriage and the deaths of his grandmother and best friend. But he did seek help from a therapist and decided to stop studying at the University of Maryland, Baltimore County in 2008.

Why ‘Millennials' may face more problems

Giorgia and Jason are just two examples of the many students struggling with anxiety, depression or other mental health issues.

David Reetz has ideas about why young people are having such a hard time. Reetz directs counseling and psychological services at the Rochester Institute of Technology in New York State.

He is also a governing board member of the Association for University and College Counseling Center Directors, a group of over 800 college counseling directors worldwide.

Reetz says the current generation of people in their 20s – often called "Millennials" – cannot cope with problems the same way that other generations did.

Millennials are less able solve interpersonal conflict or to accept criticism, he says. These skills, he adds, are abilities that employers like their workers to have.

However, Millennials are not to blame, Reetz says.

Access to information about both good and bad aspects of life increased greatly over the last 30 years. He believes the parents of Millennials caused their children to worry more because they worried more.

Reetz says parents of Millennials spent more time supervising their children than other parents did. As a result, these young people had fewer chances to learn how to take risks or solve conflicts themselves.

He adds that social media also has had an influence. Websites such as Facebook and Instagram cause people to compare themselves to others in unfair ways.

But Richard McKeon warns against making claims about how every member of a generation thinks or feels.

"There are certainly many changes in terms of the nature of neighborhoods, and communities, and family life and other issues over time that would make it hazardous to generalize about a whole generation of young people."

McKeon is the chief of suicide prevention for the Substance Abuse and Mental Health Service Administration, known as SAMHSA.

SAMHSA is a federal government agency that studies mental health issues in the U.S. Last June, the agency released a study of over 135,000 young people between the ages of 18 and 25. It found that young people in college are less likely to commit suicide with a plan than those who are not in college.

In other words, college students may suffer from mental health issues, but their conditions may not be as severe as those who are not in college.

McKeon also notes Millennials are not the first generation of young people to face severe mental health issues. In the 1980s and 1990s, the suicide rate among youth in the U.S. reached levels that experts had never seen before.

What colleges and universities can do to help

All the experts VOA contacted for this story said they are pleased that more young people are seeking help for mental health issues.

In fact, Pennsylvania State University's Ben Locke says a common concern is that colleges and universities do not have enough resources for students in need. Locke is Penn State's counseling services director.

But David Reetz at the Rochester Institute of Technology notes that most colleges have experts whom students can meet with to discuss their problems. Therapy groups are common as well.

Richard McKeon of SAMHSA adds that many other student support workers are now being trained to identify signs of mental health issues in students.

Giorgia never used the mental health support services McGill University offered. She finished her degree program in 2014 and stopped taking all medication over a year ago.

Giorgia says she feels much better, but she wishes she had been more willing to use the services at the school.

Jason did not use the mental health services his school offered either. But he did feel that speaking to the leader of the Jewish culture center on his school's campus helped him.

Jason decided to return to the University of Maryland, Baltimore County in 2012. He will complete his degree after one final semester this year.

The path to improving one's mental health is never easy. But Jason says if students start to feel they have a problem, they should know there is nothing wrong with asking for help.

Pete Musto reported on this story for VOA Learning English. George Grow was the editor.

We want to hear from you. What are some of the best ways for young people to deal with mental health issues? How can parents and schools help young people improve their mental health? Write to us in the Comments Section or on 51VOA.COM.

diagnose(d) – v. to recognize a disease or illness by examining someone

therapist – n. a person who helps people deal with mental or emotional problems by talking about those problems

counseling – n. advice and support that is given to people to help them deal with problems, make important decisions

cope – v. to deal with problems and difficult situations and try to come up with solutions

aspect(s) – n. a part of something