Update Required To play the media you will need to either update your browser to a recent version or update your Flash plugin.
By Jonathan Evans
22 March 2020


You can find a lot in popular culture about the generation of young people called millennials.

Millennials are often described in movies and television shows as feeling entitled. They act as if they have a right to the good things in life. Many millennials also are identified as jobless and more likely than other young people to be living with one or both parents.

The youngest members of this generation are in their middle 20s, while the oldest are nearly 40 years old. They lived through the Great Recession of 2007 to 2009. Many are weighed down with debt from student loans and have a hard time finding a good job in their field of study. 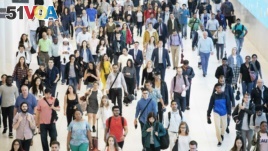 FILE - In this June 21, 2019, file photo commuters walk through a corridor in the World Trade Center Transportation Hub in New York.

Some were strong candidates for such jobs, but instead accepted a lower-paying position. Today, those decisions and experiences continue to affect millions of millennials.

However, some young adults within the millennial age group have been able to succeed and done very well. There is a name for these young men and women: "mega-llennials."

Jason Dorsey is president and researcher at the Center for Generational Kinetics, a group based in Texas. He told VOA mega-llenials kept working and tried pulling themselves forward in the work force during hard economic times.

Dorsey added that mega-llenials are now further ahead compared to the rest of their generation "because they were still out there, producing...doing what they could do to make it happen."

There is a big difference between the mega-llennials and what have been called "me-llennials." Me-llennials are members of the generation that have still struggled professionally and are still working on finding their place in life.

"What we think is fascinating is that the group of people that are most offended at work by millennials acting entitled are actually other millennials who do not feel entitled," Dorsey said. "They think the rest of the generation is giving them a bad reputation."

A 2019 opinion survey seems to suggest that may be the case. The survey was a project of the Business Insider website and Morning Consult, a privately-held technology and media company. It found that many millennials think they are doing better than others in their generation.

About 37 percent said not very good or not good at all when asked how they feel about their finances. Experts say this shows that the reality for millennials may not be quite as bad as what they are often told.

So why do some millennials do well while other people in their age group did not?

"What we found is they were more resilient oftentimes in their career," Dorsey noted. "They also managed to keep working and building their networks and did whatever they could to keep pushing themselves forward."

entitled – adj. having a right to certain benefits or privileges

reputation – n. recognition by other people of some characteristic or ability