Update Required To play the media you will need to either update your browser to a recent version or update your Flash plugin.
By Phil Dierking
04 February, 2018


Almost 60 million young people who live in countries affected by conflict or natural disaster are illiterate, the United Nations Children's Fund or UNICEF, said this week.

More investment in education is needed, UNICEF said, to fight the crisis.

UNICEF Executive Director Henrietta Fore said the numbers are a clear reminder of the tragic effects that crises can have on a child's education and their future.

UNICEF is calling for more financial support for education programs, especially during humanitarian crises. It said only 3.6 percent of humanitarian money is used for the education of young people living in emergency situations. That makes education one of the least supported areas of humanitarian aid. 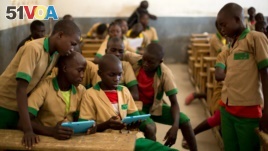 FILE - Students learn with the help of a computer tablet provided by UNICEF at a school in Baigai, northern Cameroon, Tuesday 31 October 2017.

The agency's yearly Humanitarian Action for Children appeal began on Tuesday. It called for $900 million for countries damaged by man-made and natural disasters. The money would be used on programs such as accelerated learning, teacher training, school rebuilding and on school supplies.

The findings are based on the U.N. Educational, Science and Cultural Organization, or UNESCO, literacy data on 27 emergency countries.

The countries with the highest illiteracy rates among people between the ages of 15 and 24 are Niger (76-percent), Chad (69-percent), South Sudan (68-percent), and the Central African Republic (64-percent).

UNICEF released the new data just before the start of the two-day Global Partnership for Education Replenishment Conference in Dakar, Senegal. The conference is designed to raise money to give all children and youth the opportunity to learn.

How are illiteracy rates among children in your country? We want to hear from you. Write to us in the Comments Section or on 51VOA.COM.

advocacy - n. the act or process of supporting a cause or proposal

humanitarian - n. a person who works to make other people's lives better

illiterate - adj. not knowing how to read or write

stability - n. the quality or state of something that is not easily changed or likely to change