Millionaires in America: Where Are They?

Update Required To play the media you will need to either update your browser to a recent version or update your Flash plugin.
By Susan Shand
11 September, 2018


Nearly six percent of Americans are millionaires. They each have at least one million dollars in savings.

Millionaires are found in some parts of the United States, but not others. Where they live might surprise you.

Many live near what have been called ‘wealth-building engines,' says David Thompson, a wealth expert with Phoenix Marketing International.

By this expression, he means areas with a lot of industries -- such as technology, finance and defense -- that can make people wealthy.

About 5.8 percent of the U.S. population — 7.2 million households — are millionaires. And that means they have at least one million dollars in the bank or investments. This measurement does not count the value of their home or other property, retirement plans or business partnerships.

Some people might argue that a million dollars cannot buy what it could years ago, but it is still a lot of money.

Kiplinger, publisher of business and financial information, joined with Phoenix Marketing International to find where the millionaires live. They looked at 933 urban areas, cities and towns with at least 50,000 people.

The Bridgeport-Stamford-Norwalk area of Connecticut was at the top of the list. About nine percent of the people who live there — 31,506 people in all — can call themselves millionaires.

This part of Southeastern Connecticut is close to New York City. It is also home to a number of financial businesses and investment companies. Other businesses like Priceline's owner and Xerox have offices there.

The study found that the Bridgeport-Stamford-Norwalk area has more millionaires than California's Silicon Valley. Silicon Valley is all technology, but this part of Connecticut "is finance. It's consulting," David Thompson said. 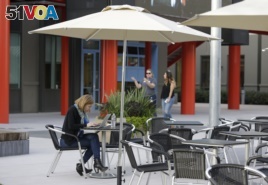 In this photo taken Feb. 3, 2015, a woman works on her laptop as two other women walk through the campus at Facebook headquarters in Menlo Park, Calif.

That represents nine percent of all families. The area is home to some of the biggest technology companies in the world, and Google, Apple and Facebook are nearby.

The U.S. capital, Washington, D.C., is next on the list. Many highly educated Americans looking for influential jobs work and live in Washington, nearby Maryland and Northern Virginia. The D.C. area is home to 206,361 millionaire households. That represents 8.9 percent of the total population.

Military spending and a naval base put Saint Mary's County, Maryland, on the millionaire map. The Lexington Park area of the county is filled with defense and aerospace research businesses. The U.S. military has business deals with several private companies based in Lexington Park. These contractors use highly skilled and educated workers who are paid well. Of 40,545 total households, 3,429 — about 8.5 percent — can call themselves millionaires.

The San Francisco area finished fifth on the U.S. millionaires' list. The California city's cost of living is 93 percent higher than the national average. Just over eight percent of San Francisco's 1,781,731 families have $1 million in savings.

Another part of the country with a high percentage of millionaires is Barnstable, Massachusetts, home to Cape Cod and Hyannis Port.

Hawaii is number 10 on the list. Thompson calls Hawaii a "different animal" because the rich go there and do not earn their money there.

Not one area in the middle of the country made the list.

consult – v. to share one's expertise or to offer advice

urban – adj. of or relating to a city or heavily populated area

household – n. people who live in the same home, and are usually members of a family

contractor - n. a business that agrees to perform work or provide supplies