Update Required To play the media you will need to either update your browser to a recent version or update your Flash plugin.
By Alice Bryant
13 December 2020


The deadly COVID-19 virus struck the central United States just as Aaron Crawford's family was in crisis. The Minnesota man was unemployed and looking for work. His wife needed a medical operation but her job kept cutting her hours because of the coronavirus crisis.

The Crawfords had no money. Their debt and unease were quickly growing. They worried about feeding themselves and their two sons, ages 5 and 10.

Crawford is a 37-year-old who served in the U.S. Navy. He saw himself as an independent and able man. Asking for food made him uneasy. "I felt like I was a failure," he said, because he could not provide for his family.

Hunger is a cruel reality in the richest country in the world. Even before the health crisis, U.S. schools provided millions of meals a day to children. And needy older Americans were sometimes forced to choose between buying medicine and food. 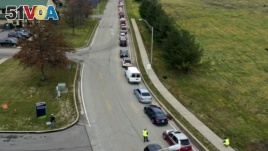 Now, with COVID-19, job losses and business closures, millions more Americans worry about food. Food banks around the country are working to meet the increasing need. An Associated Press study of data shows the amount of food aid provided in the U.S. has risen sharply in the last year.

Those fighting hunger say they have never seen anything like this in America, even during the recession of 2007 to 2009.

The first place many Americans seek help is from food aid programs in their own neighborhoods.

The Crawfords turned to the Family Resource Centers and Food Shelf organization in Apple Valley, Minnesota. When needed, they get monthly boxes of fresh fruits and vegetables, meat and other goods.

The newly hungry share similar stories of difficulty: Their industry collapsed, they lost a job or their hours were cut.

Feeding America is the nation's largest anti-hunger organization. The AP examined records from 181 of the group's food banks. The banks provided 4.2 billion meals from March through October, a record amount. The organization also saw a 60 percent average increase in food bank users during the COVID crisis. About forty percent of them had never sought food aid before this year.

And, the AP investigation found that Feeding America supplied about 57 percent more food in July through September this year than in the same months of 2019.

Feeding America estimates the number of people facing hunger will rise from 35 million in 2019 to more than 50 million by this year's end. That amounts to about 1 out of every six people in the country. The group says one in four American children will face hunger.

Some states have been hit harder by the hunger problem.

Nevada's economy depends on tourism, money spent by visitors to the state. The health crisis is crushing its hotel, restaurant and gambling industries. Feeding America says it expects Nevada will become the fifth most food-insecure state in the country this year. In 2018, it was number 20, the organization reported.

Feeding America says in four states more than 1 in 5 people are expected to be food insecure by year's end. Those states are Mississippi, Arkansas, Alabama and Louisiana.

You can see the looks on their faces, he said. "Everybody's just worried about their next meal."

Before the pandemic, the 53-year-old Butler was living well. He worked in service industry jobs. Since March, however, such work has been hard to find.

In September, the non-profit Food Research & Action Center, or FRAC, released a report on hunger in America. It said that 1 in 4 people who did not have enough to eat had good-paying jobs before COVID-19 appeared.

COVID-19 has been especially destructive among communities of color in America. Blacks and Latinos have experienced higher rates of death, infections and joblessness than other groups.

Unemployment rose sharply among Latinos, to 18.9 percent, this spring. That is higher than any other racial or ethnic group, based on federal data. Though the rate has since fallen, many are still struggling.

The FRAC report of September said women, families with children, and people of color are at greatest risk of hunger. It reported that more than 1 in 5 Black and Latino parents said they sometimes or often did not have enough to eat. The same was true of only 1 in 15 White and Asian families.

Abigail Leocadio is a 34-year-old immigrant from Mexico. The mother of four is a health care worker at a laboratory in Arizona where she lives. Earlier this year, her husband lost his job at a restaurant. Leocadio's earnings alone could not meet the family's needs.

Though they own a two-bedroom trailer, they pay $500 a month to keep it on a small piece of land. Electricity and internet service are another $450 a month. And they had to start buying more food when the health crisis forced schools to close. The children had been getting free meals at school.

Leocadio said food banks provide less than half of what her family eats in four weeks. But, the aid helps.-

"Food banks and food pantries are doing great work," says FRAC president Luis Guardia. But in the current crisis, he added, "they simply cannot do enough...."

An economic aid bill passed by lower house lawmakers this spring includes such a measure. But, the Senate continues to debate the issue.

Some Americans have found that they cannot survive without food banks.

Phyllis Marder lives in Evanston, Illinois. The 66-year-old receives monthly payments from the U.S. Social Security Administration and the national unemployment program. But this year, she had to seek additional help at a local food bank.

At first, Marder did not tell anyone that she was getting free food. But then she decided that keeping it a secret, in her words, "makes her feel worse about herself."

Marder expects her food bank visits to end soon. In a few days, she will start a job working from home as a coronavirus contract tracer.

As the year nears its end, Aaron Crawford of Minnesota feels more at ease.

Crawford now has two part-time jobs. His wife is back at work at a daycare center. And their boys are getting breakfast and lunch at their school.

Their financial troubles have not disappeared. They still have living costs to pay and a car that needs repairs.

But after many dark months, says Crawford, "There's a sense of peace."


The Associated Press reported this story. Alice Bryant adapted it for Learning English. Caty Weaver was the editor.

gambling – n. the practice of risking money in a game or bet

contact tracer – n. someone who identifies people who may have come into physical contact with a person who has a virus